About The Lafayette Escadrille 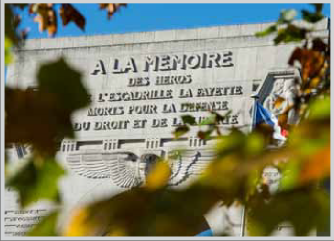 Preserving the Legacy, Honoring the Airmen

On the outskirts of Paris, a white marble arch stands in memory of the legendary “Lafayette Escadrille”.
Within this monument lie the remains of America’s first combat airmen—individuals who answered the call to fly and fight in the name of freedom, not because they had to, but because it was the right thing to do.

This is the story of those brave airmen and of the restoration of the memorial that stands forth as a proud tribute to the selfless service and sacrifice of the young aviators.

The History Of The Squadron

The Lafayette Escadrille was the brainchild of three individuals: Mr. Norman Prince of Boston, Massachusetts, Mr. William Thaw of Pittsburgh, Pennsylvania and Dr. Edmond Gros, an American expatriate living in France. Seeking to aid the Allied cause, they lobbied officials in Paris to create an all-American squadron within the French Air Service. In need of more combat forces and ever-aware of the positive propaganda value Americans flying under the French flag could afford in garnering United States support for the Allied cause.

The new squadron, officially designated N.124, The Lafayette Escadrille, was formed eight months later under the command of French Air Service Captain George Thenault. While a handful of the Americans joining the unit had previously served in the French Air Service, most were novice aviators—just having mastered the most basic elements of flight.

Since the formation of the American Escadrille, I have tried to exalt the beauty of the ideal which brought my American comrades to fight for France.

Their first combat patrols saw them strain to master their aerial craft amidst a hail of enemy gunfire. With Kiffin Rockwell scoring the unit’s first victory on May 18, 1916, these amateur airmen rapidly matured into seasoned veterans.

Operating from austere bases close to the front lines, the airmen took to the sky to secure air superiority during some of the war’s largest campaigns, including the Battle of Verdun, the Somme Offensive, the Nivelle Offensive, the Aisne Offensive, and the Ypres Offensive. The American flyers also escorted Allied bombers as they struck targets deep behind enemy lines.

The Squadron with Lufkin’s famous mascot, a lion cub he rescued from a local circus and that grew into a rather large cat.

The risks associated with daily combat operations were pronounced—with some units experiencing casualty rates in excess of 400 percent. Flying amidst such odds yielded a stark understanding regarding dedication to duty and sacrifice.

As tales of the Lafayette Escadrille spread around the globe, these young men stood as noble champions of the Allied cause. Hundreds of Americans traveled to France in a quest to join the famed squadron. Unable to accommodate the flood of volunteers within the original unit, French Air Service leaders formed the Lafayette Flying Corps—an effort that saw over two hundred American volunteers join a variety of French squadrons. Their contribution to the war was undeniable—with the volunteers shooting down 199 German aircraft.

They were the precursors of the mighty awakening of the west — of that gigantic effort of America — unparalleled in history — the greatest of all crusades, where every qualified man was enrolled under the Stars and Stripes, for no selfish aim, for no world-conquest, but for the great ideals upon which civilization depends and for which the entire resources of the nation were unsparingly contributed to assure victory.

The men and their flyiing machine

With the United States entering the War in 1917, the pioneering airmen of the Lafayette Escadrille formed the foundation on which American combat aviation was built. Donning United States Air Service uniforms, the veteran flyers continued to fly and fight, while also teaching their newly arrived counterparts about the nuances of combat aviation. This continued service proved critical, with American airpower helping win a series of battles that ultimately brought victory to the Allied cause in November of 1918.

The men of the Lafayette Escadrille came to the aid of France at the height of the First World War, when the debilitating cost of attrition warfare threatened to push Allied nations to the brink. With vast trench-bound armies locked in a bloody stalemate, commanders sought to harness the air domain as a new front to secure victory.

With no single nation possessing a monopoly on the aerial domain, leaders also had to consider how to counter hostile forms of airpower. Airmen initially improvised by taking rifles and pistols along on their patrols. Aerial duels erupted above the trench lines as opposing flyers fired at one-another in an ad hoc fashion. This approach was eventually superseded as aircraft designers devised methods of installing fixed machine guns to their latest designs. A new breed of flyer emerged, one whose sole purpose was to gain control of the sky— the fighter pilot.

Every flight is a romance, every record an epic. They are the knighthood of this war. Without fear and without reproach; and they recall the legendary days of chivalry, not merely the daring of their exploits, but the nobility of their spirit.

Operations in the aerial domain revolutionized warfare. For centuries, armies and navies had sought victory with fielded forces attacking head-on in a set of surface campaigns. With the advent of powered flight, military leaders gradually recognized the potential afforded by taking the fight to the sky. Airmen could inform command decisions by observing the position and composition of enemy forces. They also expanded the scale and scope of the battle arena as they attacked opposing frontline forces and struck strategic targets deep behind enemy lines.

As synchronized guns began to be fitted to the airplanes, the planes themselves became shooting platforms. This gave rise to ever more sophisticated aerobatic maneuvers designed to get up and behind the other enemy planes and birthed… the fighter pilot.