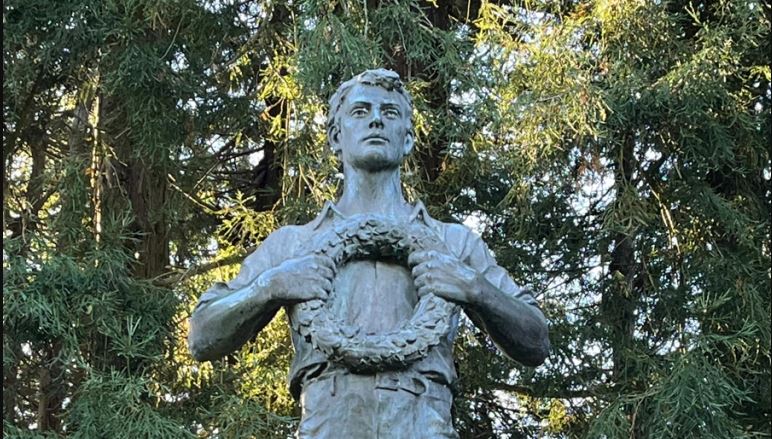 The Doughboy Statue, dedicated to the soldiers who died in World War I, is located in Golden Gate Park

Why would one Golden Gate Park memorial need three dedications?

America’s participation in World War I spurred the creation of memorials not just honoring a hometown’s fallen soldiers, but a memorial could be dedicated to deceased members of a connected organization.

A ceremony on Nov. 6, 1927, started with a parade from Oak and Stanyan streets to the Grove of Memory off of “Main Drive” (now JFK Drive) near Fulton Street and 16th Avenue.

The Grove of Memory Association was comprised of members from two California heritage associations – the Native Sons and the Native Daughters of the Golden West – according to W. M. Strother writing for “The Municipal Employee.” 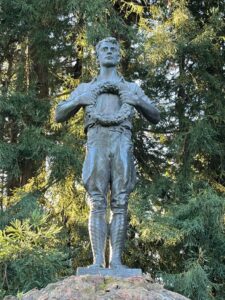 The Doughboy Statue, dedicated to the soldiers who died in World War I, is located northwest of the intersection of Stow Lake and JFK drives in Golden Gate Park. Photo by Michael Durand.

Thirty-nine redwood trees in the grove honored the 39 San Francisco members of the Native Sons of the Golden West who died serving in World War I, then known as the “World War” or “Great War.” Each redwood tree had a name tag of one of the fallen San Francisco soldiers, but the tags are no longer present today. A seven-foot-tall boulder was installed, along with a plaque with names of the 39 fallen soldiers. More than 500 people attended the ceremony, which included the vice president of the Grove of Memory Association presenting American and California flags to Troop 82 of the Boy Scouts. The troop was described by the Nov. 7, 1927, SF Examiner as “guardian” of an older grove of memory on Sloat Boulevard and Junipero Serra Highway.

The Grove of Memory Association planned to fundraise for adding a seven-foot-tall statue of a soldier, sculpted by Melvin Earl Cummings, a member of San Francisco’s Park Commission, according to “The Municipal Employee,” a magazine for San Francisco city employees.

Cummings’s artistic career had already produced works for the Golden Gate Park, such as statue of Robert Burns and the sundial monument to California explorers, when his statue of a soldier – called the “The San Francisco Gold Star” – was included as part of the 1929 All-American Exhibition of Contemporary Sculpture held by the National Sculpture Society at San Francisco’s Legion of Honor (where Cummings was on the Board of Trustees).

After “The San Francisco Gold Star” statue was placed on top of the boulder in the Grove of Memory in Golden Gate Park, it became known as “The Doughboy,” a term for World War I soldiers. (Christopher Pollock’s book on Golden Gate Park attributes the use of the word “doughboy” to refer to World War I infantrymen whose uniform buttons resembled dough-based treats in care packages.)

The statue’s description from the Nov. 3, 1929, SF Examiner describes a gold star in the center of the wreath the soldier is holding to his chest, but no such star is visible there today, though various stars are found throughout the wreath.