By Mike “Duke” Venturino
via the GUNS Magazine web site 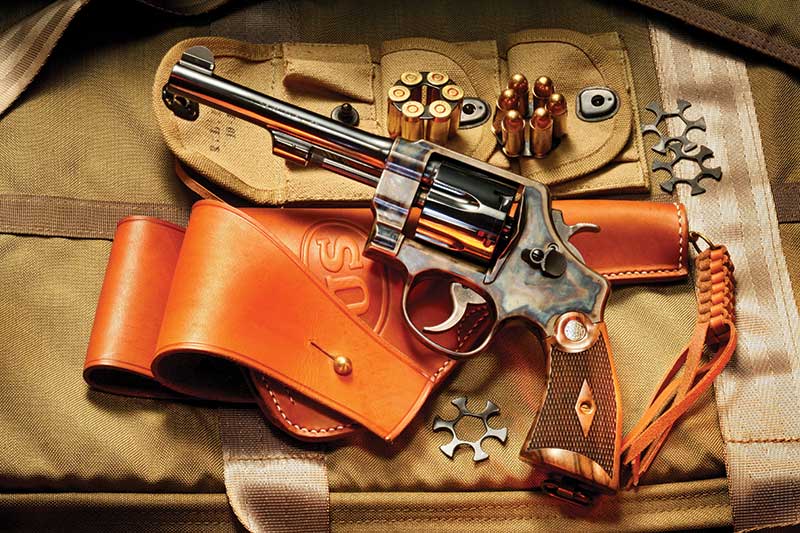 The S&W M1917 is nicely complimented by this repro holster from Paciﬁc Canvas and Leather. Available in right or left hand it can be marked “US” or “USMC.” Also available is a repro of the scarce canvas clip pouch holding 18 rounds in half-moon clips.

As a general rule double action revolvers don’t have the historical aura around them, as do ones like the S&W Model No. 3 “Schoﬁeld” single action or the Colt Model 1911 autoloader. One exception to the rule is the Smith & Wesson Model 1917.

It was developed during a time of national emergency and made its mark with the US military in two World Wars. Furthermore, it started the trend of chambering revolvers for the .45 ACP (Automatic Colt Pistol) still popular today.

Ninety years ago when the United States entered World War I, the American military found itself unprepared in regards to nearly all military equipment from handguns to aeroplanes.

The US Army’s official handgun was the Model 1911 autoloader made by Colt. Not nearly enough of them were in service to provide for the rapidly expanding military. At the time, both Colt and Smith & Wesson were manufacturing large bore, double-action revolvers.

Some far-thinking engineer at the latter company had already conceived of a manner in which these revolvers could be adapted to fi ring the rimless .45 ACP by snapping the .45 ACP rounds into stamped spring- steel clips, which would then serve as the cartridges’ rims and give the revolver extractors something to push against. Because these little clips held three cartridges in a semi-circular pattern they came to be called “half-moon” clips.

The US Government gave contracts to both Colt and Smith & Wesson for revolvers collectively named “US Model 1917.” These handguns were simply Colt’s standard New Service and Smith & Wesson’s N-frame sixguns. Interestingly Smith & Wesson gave their Model 1917s the same level of polish and blue as their commercial handguns, but Colt put a dull polish on theirs. Grips for both were simple two-piece smooth walnut.

According to US Infantry Weapons Of World War II by Bruce Canfield, Colt sold about 150,000 Model 1917s to the government and Smith & Wesson’s total was slightly greater at about 153,000. These .45 caliber revolvers saw considerable use on the battlefields of World War I. They must have suffered considerable losses because (also according to Canfield’s book) when they were put into storage after the conflict only 96,530 of the Colts and 91,500 of the Smith & Wessons were in government hands.