What Makes American Music American? The World War I Connection

By Joshua Villanueva
Special to the Doughboy Foundation web site

Joshua Villanueva conducts the CMA’s Copland Chamber Orchestra in a performance of Aaron Copland’s Appalachian Spring in 2021. The origins of this piece are deeply rooted in World War I.

There’s nothing more American than growing up in a multi-racial community, checking out K-pop videos on the internet, and showing off your latest dance moves on TikTok for the world to see. But have you wondered what exactly makes something American?

Aaron Copland may not be a household name, but he certainly made an impact on American rock and pop culture. To name a few, Elvis Presley’s “Can’t Help Falling in Love” was adapted from “Plaisir d’Amour,” a song popularized by Copland’s film score for The Heiress. Michael Jackson also used Copland’s Fanfare for the Common Man in his 30th Anniversary Celebration concert TV special.

Who Was Aaron Copland? 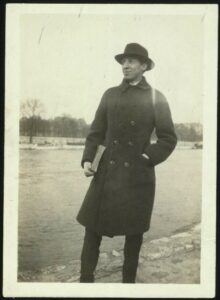 Dubbed “the Dean of American Composers” by critics, Aaron Copland, the son of Lithuanian Jewish immigrants, rummaged through Chopin and Tchaikovsky repertoire in Manhattan’s Fifty-eighth Street public library a century ago as a curious teenager. He would chase the latest Broadway tune down Tin Pan Alley on West 28th Street and take correspondence courses in harmony and theory. Finally, this boy would travel to France after World War I to study music.

However, World War I changed America’s music overnight. Frankfurters sold at baseball parks were renamed hotdogs while Viennese operettas dominating American theaters disappeared. “100% Americanism” swept through America, and American public opinion began a decisive shift against Germany and the Central Powers when Germany sank the RMS Lusitania on May 7, 1915. Copland and other American contemporaries like George Gershwin envisioned American modern music as a distinct identity, not an adaptation of European traditions. In Copland’s 1963 book, Copland on Music, he explains:

It seems to me that the first world war may be part of the reason for this need to cut oneself off, so to speak from the apron, the creative apron strings of European art. The fact that the first world war was forcibly made the separation for us both in Latin and North America, I think was one of the contributing causes for our being able to conceive of an independent spirit free of the European spirit.

World War I had a profound impact on Copland. Throughout his career, Copland quoted “My Buddy,” a famous World War I song about pulling together for a common purpose to fight the “war to end all wars,” in his compositions. Copland acknowledged his nationalist sentiments in his search for a uniquely American sound, only to find it still in its infancy. 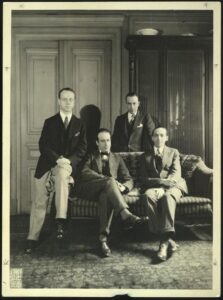 Even after the war, there was no socially accepted indigenous American sound. Instead, Americans borrowed religious hymns and popular tunes from German and English songs. Critics and influential personalities such as Henry Ford, founder of Ford Motor Company, shunned jazz and ragtime as saloon and brothel music. Copland had to go to France to learn about America, where European composers like Darius Milhaud and Igor Stravinsky had already incorporated American jazz into their works since its arrival via James Reese Europe during World War I.

In France, Copland studied with Nadia Boulanger, a well-respected professor of composition at the American Conservatory at Fontainebleau. Boulanger helped Copland realize that American musical and rhythmical idioms were distinct from those of European musical literature. Thus, jazz rhythms became another modern compositional resource for someone searching for a uniquely American sound. Copland biographer Vivian Perlis writes:

“Copland had gone to Europe to learn how to compose and had “found” America while viewing it from abroad. He saw European composers take up American jazz and thought that if composers like Debussy and Ravel, Stravinsky and Milhaud, could use ragtime and jazz rhythms, the way might be open for American composers [to do so as well]. Perhaps, he thought, here finally was music an American might write better than a European.”

Although it may seem ironic that Copland began to formulate American music in nationalist terms while in France, it was not unusual for artists of his generation to find their voices abroad after World War I. Malcolm Cowley, a poet and chronicler of American expatriates in Europe, writes,

“We saw the America they wished us to see and admired it through their distant eyes. . . . We had come three thousand miles in search of Europe and had found America, in a vision half remembered, half-falsified and romanced. Should we ever return to our own far country?”

From Copland’s European vantage point, America’s economic development, the expanding Western frontier, and populism were the driving forces behind the search for the American sound. Years later, during the Great Depression and World War II, Copland would recall the “wave of sympathy for and identification with the plight of the common man. There was a ‘market’ for music evocative of the American scene – industrial backgrounds, landscapes of the Far West, and so forth.” How could the son of Lithuanian Jewish immigrants, who grew up under the shadow of the Brooklyn Bridge, possibly invent the “American sound” of cowboys and fiddles on the Western frontier? Look no further than Copland’s Appalachian Spring. 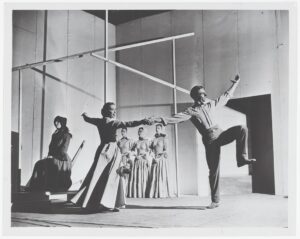 Commissioned originally as a ballet in 1942 by Martha Graham and Elizabeth Sprague Coolidge, Appalachian Spring tells the story of a cocky groom, an anxious bride, a pioneer woman, and an ecstasy-filled revivalist preacher in a newly-built farmhouse in the Pennsylvania hills. The ballet opens in perfect stillness. Violas and second violins play soft and low tones to plant the seeds of two simple chords that will define the story world. There may only be two harmonies (for the music buff readers, they’re A Major and E Major), but each note carries enough gravitas and promise. The structural security of these two harmonies may be sparse, but just like Isamu Noguchi’s Japanese Noh-theater-inspired set for Graham’s ballet, a few wooden beams and a wall are enough to set the scene of the farmhouse. In the sections that follow, there’s a duet for the bride and groom, a preacher lecturing about human fate, and the most famous section featuring a set of five variations on the Shaker tune, “The Gift to be Simple” that bursts forth the only moment of grandiosity in the piece. The piece concludes “like a prayer,” as Copland describes, with the bride saying her final farewell to her youth. The young couple is left alone in their new house, quiet and strong, as the last rays of sunlight disappear over the Appalachians.

Copland always laughed when he recounted how the title Appalachian Spring came to be.

The first thing I said to [Martha Graham] when I came down to the rehearsals…in Washington was, “Martha, what’dya call the ballet?” She said, “Appalachian Spring.” “Oh,” I said, “What a nice name. Where’d’ya get it?” She said, “It’s the title of a poem by Hart Crane.” “Oh,” I said, “Does the poem have anything to do with the ballet?” She said, “No, I just liked the title and … took it.” And over and over again, nowadays people come up to me after seeing the ballet on stage and say, “Mr. Copland, when I see the ballet and when I hear your music I can just see the Appalachians and just feel spring.” [And you know], I’ve begun to see the Appalachians a bit myself!

On a side note, Hart Crane was a World War I munitions plant worker-turned poet.

Elizabeth Sprague Coolidge also had clear ideas about the new piece. She wanted the premiere to be at the Library of Congress’s Coolidge Auditorium, an auditorium she financed, where “true chamber music” of about ten to twelve musicians could snugly fit in the auditorium’s small orchestra pit.

The origins of this piece are deeply rooted in World War I. Religious elements such as the preacher, the Shaker tune, and the prayer-like ending point to America’s Christian hymn tradition popular among soldiers during World War I. Asymmetrically sliced accented phrases give hints of jazz and geometric planes of Cubism. The setting itself contains undertones of nationalism. The contrast between the untouched beauty of the Appalachian Mountains and the rolling plains of the American Midwest to the ugly destruction of the European Western Front during both world wars convinced Americans that they had to protect their homeland to preserve its beauty. Copland’s “American” style of wide melodic leaps and rhythmic energy has become a metaphor for the wide-open spaces of North America marked by the excitement of the birth of a new American nation.

Copland’s eclecticism could not be more evident than imagining him writing Appalachian Spring under Hollywood’s spotlights. Much of the piece was written while scoring the film, The North Star, with Ira Gershwin in 1943. Scoring a movie about Nazi Germany’s brutal invasion of Ukraine, Copland must have come face-to-face again with his own Lithuanian Jewish background.

Diversity is what makes American music American. A synthesis of vastly different cultural elements is what made it possible for a Jewish Brooklynite to invent the “American sound” of the Wild West. Copland’s background may be a world apart from the Appalachian Mountains, but it was growing up in the busy streets of New York, in France where he first understood what America meant to him, and in Hollywood where he discovered the American spirit during the war that shaped his views about American modern music

In today’s divisive culture, agreeing on a single American icon is doubtful. Both Republicans and Democrats have used Copland’s Fanfare for the Common Man and Lincoln Portrait to project their own “100% Americanism” in their campaigns. Yet, at times, his music has been questioned. Most notably, Joseph McCarthy and his House Committee on Un-American Activities scrutinized Copland’s patriotism for alleged communist sympathies.

Appalachian Spring embodies the American dream open to all. It depicts a land where hard work defines who you are. As the world gradually recovers from fighting a world war against COVID-19 amid polarizing politics, countries look to America’s heritage of economic opportunity, diversity, and innovation. The excitement and struggles of everyday life depicted in Appalachian Spring ring true to our story today. It is an eclectic story that tells the struggle and grace all Americans are blessed with, a new spring for a new world.

Check out the video of talented young musicians playing Appalachian Spring which accompanies this article. If Copland were to see an ensemble like this with young artists from different backgrounds playing his music, how could he not love that?

Joshua Villanueva is an incoming student at UC Hastings College of the Law. He received his masters of international studies at the Josef Korbel School of International Studies at the University of Denver and completed his undergraduate work in piano performance and classical studies at McGill University. He previously interned with the Canadian Broadcasting Corp. (CBC Music), and served as a researcher for the U.S. World War I Centennial Commission, spearheading the “American Music in WWI” project.