via the Department of Veterans Affairs Veterans Benefit Administration 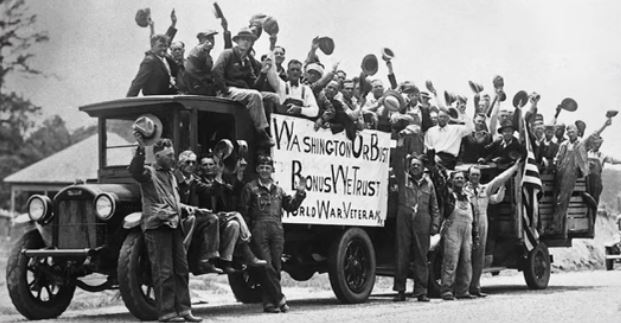 The Veterans Benefits Administration invites you to tune into episode two of VBA’s new video series, VBA History in Focus: 100 Objects. This episode recounts the dramatic story of the thousands of WWI Veterans who traveled to Washington, D.C., during the height of the Great Depression in 1932.

Dubbed the Bonus Army, they were seeking early payment of the bonus certificates they had received after the war as extra compensation for their military service. Fearful that the Bonus Army demonstrations would turn violent, President Herbert Hoover on July 28 sent in the Army to restore order, leading to a confrontation in downtown Washington captured in stark photos and stunning newsreel footage.

The events of that day would reverberate long afterwards, affecting the outcome of the 1932 presidential election and the creation of the 1944 GI Bill.

The video is adapted from the History of VA in 100 Objects, a virtual exhibit that is being published serially on the VA History website throughout 2022 and 2023. The exhibit spotlights objects that illuminate how the Nation has honored and cared for Veterans from 1776 to the present. Future episodes in the series will cover the first widows’ pensions and the origins of the 1944 GI Bill. Join the journey through VA’s past.