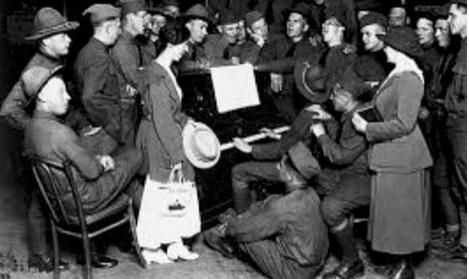 One hundred years may have passed since the guns on the Western Front fell silent, but the songs the soldiers sang in the trenches live on and some are still enjoyed to this day.

Going to war is never easy, and it’s no surprise that music was the therapy of choice for many soldiers in World War I.

There are multiple documentaries including Apocalypse: World War I (watch on Sling TV) which show what life was like for soldiers in the war and provide fascinating glimpses into this era.

British soldiers sang this favorite as a marching song. Its author, Jack Judge, was an Englishman born to Irish parents in 1873. Even before the war, this song had enjoyed popularity among Irish expatriates living in England. Today, the music is one of the most iconic pieces of World War I.

The song’s ending of “And we won’t come back till it’s over, over there” shows the determination of Allied forces to get the job done during the war. They were in it to win, and they would see it done, as this song states so strongly.

This song became popular with American service members, mainly owing to its Broadway origins. George M. Cohan, the legendary Broadway composer, wrote the song after news broke of the Americans entering the war. This song served as an essential part of gaining support for the war effort. The song is one of the ones that Cohan is probably best remembered for. 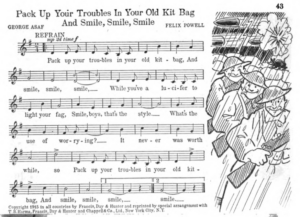 Song #3: Pack All Your Troubles (In Your Old Kit Bag)

The song is now thought of as one of the most popular British marching songs from this era. George Henry Powell, a songwriter from Wales, authored the song with a tune from his brother, Felix Powell. Another widespread usage for this song was in music halls, sung along with other songs that promoted support for the war effort. Many artists have covered this song in the years since its composition. 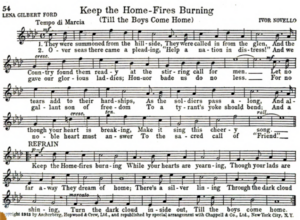 Song #4: Keep the Home-Fires Burning (‘Till the Boys Come Home)

“Keep the home fires burning, while your hearts are yearning” sums up support for the troops in this patriotic British song. As a very popular song on the homefront, several artists recorded the song, including Frederick J. Wheeler, John McCormack, Stanley Kirkby, and James F. Harrison. These early performances helped secure the song’s legacy.

The song’s composer was Ivor Novello, and Lena Guilbert Ford wrote the lyrics. This song is considered one of the more iconic songs of the era that emphasizes support for the troops. The song celebrates an era where the sacrifices that service members made were of great importance to all.

Although initially composed as a trumpet march for the Balkan War, this piece saw renewed popularity among Russians, Slovakians, Bulgarians, and Poles during World War I. Vasily Agapkin composed this instrumental piece in 1912, honoring the women from the Slavic countries who accompanied their husbands to war.

This march was played during World War I as Russian soldiers went off to war, where many of the wives followed in the footsteps of the women who followed their husbands during the Balkan War. The Russian White Army was also said to have used this song as a type of unofficial anthem, which demonstrates the solid regional popularity of the piece.

This song’s line: “Grant victory to the children of France,” paints a sad picture of an innocent group impacted by the war. Claude Debussy wrote this song in 1915, during a time of despair about the state of things because of the war, marking one of his last compositions before passing away in 1918.

Although it is not as well-known as some of the other songs of this era, the piece paints a portrait of the costs of war. One of the things we can learn from this piece is how much of an impact the fighting had on some of the most vulnerable. Many remember this song as an example of how much the war impacted us that we might not think about as easily.

The songs of World War I, sung by people of several nations, paint a vivid picture of what life was like, both for the service members and others dealing with the impact of the war. These songs are not only about the realities of war but about the loneliness and longing for home that so many faced. These songs help put a more “human” face on the struggles that troops and civilians faced.
Getting familiar with these songs will give you a new appreciation for the music of the era. You’ll be able to learn more about the culture in those times. Knowing about the music, along with seeing footage of the troops, gives a perspective that you can never find in written accounts alone.

To learn more about how music played a crucial role in helping the United States and its allies win the war, visit American Music in World War I.