“The Smoke of War”: Margaret “Molly” Brown and World War I

By Sheridan Brown
Special to the Doughboy Foundation web site 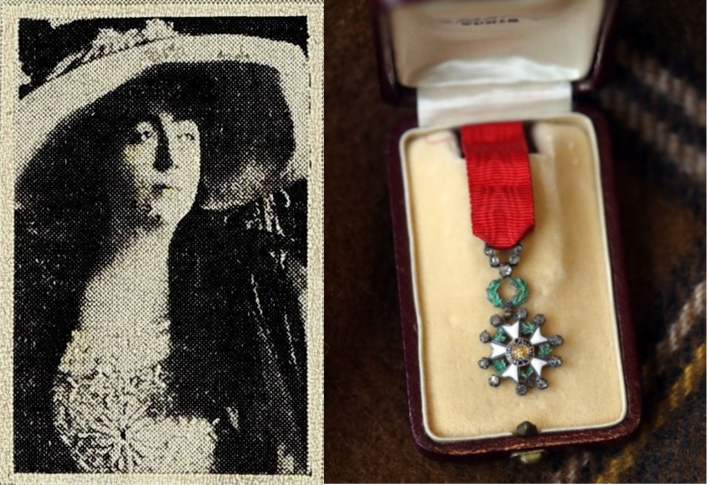 Margaret Brown with Legion of Honor

At the outbreak of World War I on the European continent, the United States, at least officially, stood aloof. When Congress issued their declaration of war against Germany on April 6, 1917, the American military mobilized–and discovered that its women were already hard at work.

Despite not being allowed to fight on the front lines, women made their mark in the war–as nurses, factory workers, activists, and more. From housewives to socialites, these women threw their energy behind the wartime efforts of a country that still refused to allow them political autonomy.

Among their hardworking ranks was a Denver activist and society woman named Margaret Brown. 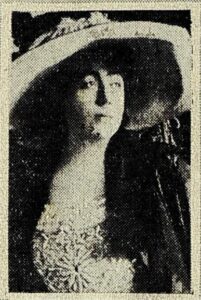 Today, Margaret is typically known as Molly Brown, thanks in large part to the popular musical The Unsinkable Molly Brown which tells a largely fictionalized version of her life, and she is remembered by most for surviving the tragic sinking of the RMS Titanic in 1912. But in her day, the name “Margaret Brown” was associated with philanthropy, women’s rights, and protection for workers, along with a quick wit and indomitable personality. As a daughter of hardworking Irish immigrants, Margaret knew all too well the realities of working-class life, and after the gold ore discovery that enabled her family to enjoy a luxurious upper-class lifestyle, she spent much of her life discovering ways she could aid those around. Often, this took the form of raising money and awareness for her favorite causes, but Margaret did not shy from hard work when it was needed.

In the wake of the Titanic sinking—her most enduring accomplishment though not the most significant to those who knew her—newspaper reporters found her on the rescuing ship, “nursing 100 hysterical women” who, like her, had survived the tragedy (1) . She would employ these nursing skills again two years later when striking miners in Ludlow, Colorado, were fired on by company security and the National Guard, sparking a heated battle which left 25 dead, including 11 children (2). Retaliatory violence in the following months left more dead and wounded, and in April, she departed for Denver, intending to offer her services nursing the wounded. As World War I raged on into 1915 and 1916, and the United States became formally involved in 1917, Margaret Brown came to believe her nursing skills could be put to a similar use abroad as they had at home.

Near the beginning of the war, Margaret expressed her desire to serve as a nurse, or even to fight if necessary and permitted. Always ahead of her time, Margaret was eager to contribute to the cause without being held back by the restrictions of her status as an upper-class woman, and headlines boldly declared, “Heroine of the Titanic…sniffs from afar the smoke of war and volunteers as nurse”. She offered her luxurious rented estate in Newport, Rhode Island, to be used as an army hospital, and pledged money to furnish the hospital and pay for medicines and other supplies (3). “Further than this,” another paper continued, “Mrs. Brown is willing to purchase medicines and medical supplies to take with her should her services be needed” (4).

While these grand and generous promises made headlines, Margaret’s departure for Europe and her exact activities while abroad are largely undocumented. In her book Molly Brown: Unraveling the Myth, Kristen Iverson indicates Mrs. Brown may have spent some of this time working with the American Committee for Devastated France (typically known as CARD after its French name, Comité Américain pour les Régions Dévastées de France) (5) . CARD had been founded in 1918 by Anne Morgan, daughter of American banking magnate J.P. Morgan, who had begun raising money for war relief efforts since the war first broke out. During CARD’s six years of operation, Anne Morgan supervised hundreds of relief workers—most of them middle- and upper-class women like Margaret Brown. Together, these workers rebuilt homes, established schools and libraries, offered poverty relief for children and families, and reseeded thousands of acres of land (6). What role, if any, Margaret played in this work is not clearly documented by the CARD records which remain.

An unidentified reporter penned several remarks in an article which was later clipped and pasted into a scrapbook by Margaret’s niece, Helen Tobin Kosure, but the exact date, paper, and reporter remain unknown. “If I were requested,” this reporter wrote, “to personify perpetual activity, I believe I’d name Mrs. James J. Brown…Her latest effort has to do with a relief station which eventually will be situated somewhere in France, between trenches and a base hospital. Mrs. Brown is preparing to sail, taking along a pair of trained nurses and full equipment for the station” (7) . Did Margaret succeed in establishing this aid station? Did she throw her boundless energy and heart for service into work for CARD, the Red Cross, or another organization? These questions must, for now, remain mysteries, as any records which could answer them remain undiscovered. Until The Sun reported her return to the United States in June 1919 after a time abroad “doing war work”  (8), Margaret’s activities are undocumented. 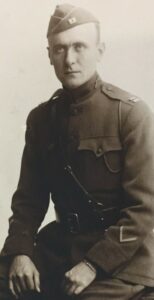 Lawrence Brown in his uniform, mid-1918.

Even as Margaret Brown grappled with the effects of the war as an activist, she also had to face them as a mother. Her son, Captain Lawrence Brown, was a captain in the American Expeditionary Forces stationed on the Hindenburg Line. “It’s next to impossible to write here,” he told his mother in a letter in August of 1918. “I am working harder than I ever did in my life, and at that I am enjoying it all more than I have ever enjoyed anything. However, I become intensely lonely at times… We, over here, are much wiser for our experiences and much more cautious, and we realize much has to be done before we are qualified to do much bragging.” (9) A month later, Lawrence Brown was exposed to mustard gas and evacuated from the front lines for treatment. He spent several months recovering in Great Britain before making a long-awaited return to his family in the United States.

Lawrence Brown’s brush with mustard gas, all things considered, was fairly mild. Many other soldiers were less lucky. The introduction of poisonous gas as a battlefield weapon–first deployed by the German army in Ypres, Belgium, in April 1915–ushered in a new era of warfare and of battlefield aid. Many types of gas were used during the course of the war, but one evoked the most terror among the troops: Dichlorethyl Sulfide, commonly known as mustard gas. In addition to posing dangers to the lungs, mustard gas burned on contact with the skin and could cause blindness when it came into contact with the eyes—a favorite plot point for filmmakers, from Alfonso Cuarón’s retelling of A Little Princess (1995) to newer TV shows like Downton Abbey. For most victims, this blindness was temporary, but not all soldiers regained their sight, leaving them with the daunting challenge of coping with permanently impaired vision. (10) Both in the US and in Europe, Margaret spent time helping these soldiers relearn tasks without sight, including teaching them Braille and “various useful pursuits” (11). When she was awarded her French Legion of Honor shortly before her death in 1932, papers cited her efforts “in behalf of the war blind” (12) as a primary reason for this prestigious award.

The Legion of Honor—the highest civilian honor the French government awards—was bestowed upon Margaret on February 12, 1932, just eight months before her death. While we may never know the intimate details of her efforts during the war and beyond, it’s clear that her activities held weight for those who were impacted in her time. The Legion of Honor remains the testament to Margaret Brown’s work abroad, preserving the impact of her efforts even if the specifics have been forgotten. 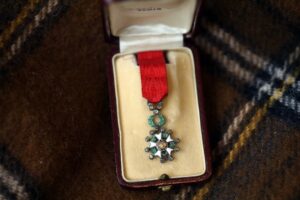 Legion of Honor medal like the one given to Margaret Brown in 1932.

[1] “Mrs. J.J. Brown of Denver is Heroine of the Titanic,” The Denver Post, April 19, 1912. [2] Dehler, Gregory. 2022. Ludlow Massacre. April 13. Accessed October 20, 2022. https://www.britannica.com/event/Ludlow-Massacre. [3] “Heroine of the Titanic Offers Newport Cottage as a Hospital for Navy”. This, like many news articles about Margaret Brown, was clipped from its original publication and included in the scrapbook of Margaret Brown’s niece, Helen Tobin Kosure. As a result, the original paper, author, and date of the article are unknown; however, a letter written in response to Margaret’s offer is dated January 2, 1918, giving an approximate time for the writing of this article. [4] “Mrs. James J. Brown Offers to be a Nurse”, April 22 (likely 1917). Helen Tobin Kosure Scrapbook. As with the above citation, the paper and author of this article cannot be identified. [5] Iverson, Kristen. 2018. Molly Brown: Unravelling the Myth, 3rd Edition. Denver: Johnson Books. [6] American Friends of Blerancourt. n.d. Story of Anne Morgan, Founder of The Franco-American Museum of the Chateau de Blerancourt. Accessed October 20, 2022. https://www.americanfriendsofblerancourt.org/anne-morgan. [7] Unknown author, paper, or date. Helen Tobin Kosure Scrapbook. [8] “Visitors Flock to Newport for the Week End and Many More Cottages are Opened for the Season,” The Sun, June 22, 1919. [9] “Everything is Looking Fine”, August 28, 1918. News article transcribing the letter was clipped from its source and preserved in the scrapbook of Lawrence Brown, which was later bequeathed to the Colorado Historical Society. [10] Fitzgerald, Gerard J. 2008. “Chemical Warfare and Medical Response During World War I.” American Journal of Public Health 611-625. https://www.ncbi.nlm.nih.gov/pmc/articles/PMC2376985/. [11] “They Say it is Not Time”, unknown author, paper, or date. Helen Tobin Kosure Scrapbook. [12] Mcabe, Ruth, “Legion of Honor Knighthood Given Mrs. J. J. Brown,” The Denver Post, April 19, 1932.