The Real A-Team of Soldiers on Mercy Missions

By William Lambers
via the Times-Herald newspaper (CA) web site 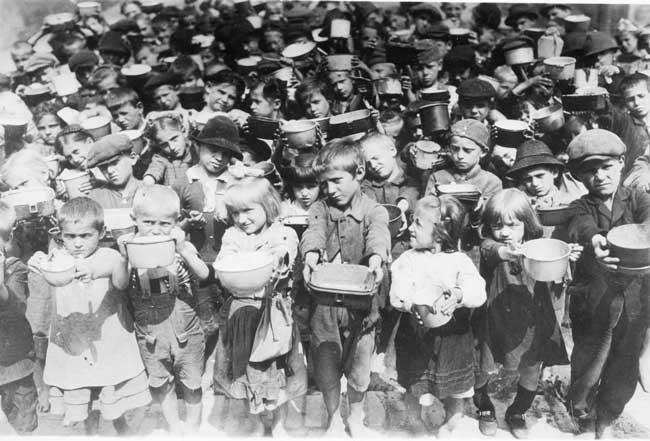 The Polish children here are shown receiving American food relief in post-World war I Poland, probably in 1919. Poland was a priority for the Americn Relief Administration becuse of the enormous need.

The “A-Team,” was the title of a TV series starring Mr. T with soldiers on missions of mercy. On this Veterans Day let’s remember a real-life “A-Team” that included U.S. soldiers. This was the American Relief Administration (ARA) with officers from the Army, Navy and civilians feeding starving victims of World War One.

Following the Armistice of Nov. 11, 1918, which ended the fighting of WWI, the enemy of hunger still threatened millions. Food shortages were the result of years of fighting as the U.S. and the Allies battled Germany and the Central Powers.

This is where the ARA took action, to feed the hungry and restore stability in Europe. Future president Herbert Hoover was the coordinator of these noble American relief efforts. U.S. soldiers took part in the ARA missions. The Doughboys, as they were called, fought in some of the fiercest battles in history including the Meuse-Argonne offensive which led to the defeat of Germany in World War I.

Now the Doughboys and the ARA were bringing food to Europe’s starving nations, including mountainous Montenegro. There the ARA had to move food by pack horses in heavy snows or even by cable over broken bridges.

In 1919 people were starving in Riga, the capital of Latvia. So the ARA dispatched a train of food to Riga under the command of Lt. George Harrington. But fighting was still ongoing in Latvia following a Communist invasion, and threatened to derail the ARA’s life-saving mission. The train was shot at by the Communist forces.

Herbert Hoover wrote in his memoirs, “The train reached a point ten miles from the city; beyond that the tracks had been torn up. Lieutenant Harrington, being the kind of American he was, set his doughboys to recruiting labor and repairing tracks.” The ARA train reached its destination, bringing food to hungry Latvians.

During his survey of Riga, Lt. Harrington identified the importance of reestablishing school lunches. He wrote “Each school has a kitchen. It therefore can be used as a means of reaching the children of Riga.”

School meals and infant feeding saved the health of Latvian children. This child-feeding was repeated throughout Europe. The ARA’s heroics was funded by generous citizens back home and Congressional funding.

Today, you can provide heroics like the ARA did after World War I by supporting U.S. food aid to countries in need.

Read the entire article on the Times-Herald web site here: