By J.B. Rivard
via the MilitaryHistoryNow.com web site 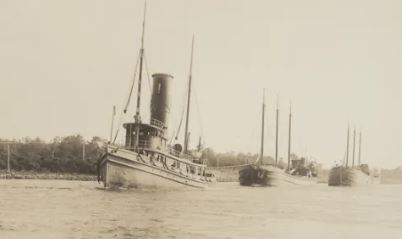 View of tugboat Perth Amboy with tow, in 1915

THE U.S. ENTERED the First World War on April 6, 1917, but the American Expeditionary Force (AEF) did not begin operations in France until July. A year later—although it is now mostly forgotten—the U.S. state of Massachusetts came under attack by Germany.

The message received at the Chatham Naval Air Station the morning of July 21, 1918 was crisp:

“Submarine sighted. Tug and three barges being fired on, and one is sinking three miles off Coast Guard Station 40.”

Station 40 was on Nauset Beach, 70 miles southeast of Boston.

A long-range Type 151 U-Boat, similar the one pictured here, surfaced off Orleans, Cape Cod in July of 1918 and opened fire on local shipping. Patrol planes in the area converged on the scene and what followed was the only attack on the contiguous United States during World War. 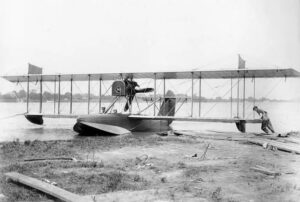 Once copilot Ed Shields, also a Navy Ensign, was seated beside Lingard with motor running, only a bombardier was needed to respond to the incursion. Chief Special Mechanic Edward Howard waded out, climbed into the round cockpit in the prow of the flying boat, and Lingard prepared for takeoff.

The Liberty motor’s position above the heads of the pilots meant its takeoff roar was deafening. But the biplane’s progress across the water was less impressive. The aviators caught some spray as the seaplane’s hull plowed through the chop. The unbalanced load of a 260-lb bomb on one side caused difficulty for pilot Lingard in keeping the wings level. He was well aware that capture of a wave by the overloaded wing could lead to a spiral crack-up and a dunking.

After a long takeoff run, the Liberty-driven two-blade propeller finally lifted the nearly three-ton aeroplane from the water. Upon gaining a few hundred feet of altitude, and flying north-by-northwest, the aviators soon had a first view of the unfolding drama off Nauset Beach.

It turned out the initial alert had misstated the number of barges being towed by the steam tugboat Perth Amboy—there were four rather than three. And sitting motionless seaward of the tug was a surfaced German submarine, its big deck guns blazing away. It was the 213-foot-long U-156, the largest of the Kaiser’s U-boat fleet. With shells bursting around it, the tug struggled to escape, its three-masted cargo barges strung out behind like baubles on a necklace.

Read the entire article on the MilitaryHistoryNow.com web site here: