Remembering the veterans who marched on DC to demand bonuses during the Depression, only to be violently driven out by active-duty soldiers 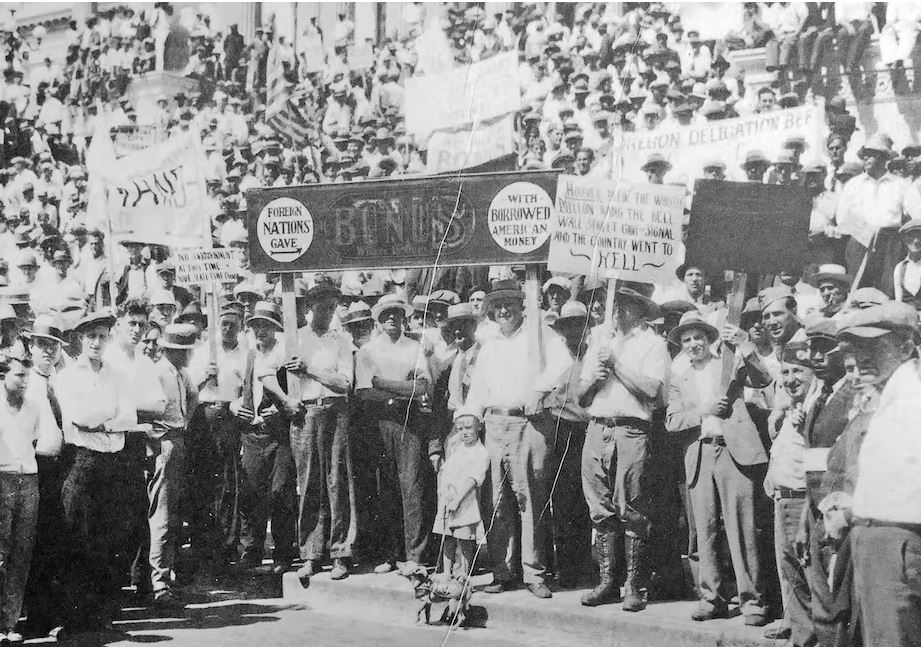 The Bonus Army March is a forgotten footnote of American history. It involved as many as 30,000 mostly unemployed veterans who converged on Washington, D.C. in the spring and summer of 1932 to demand an early cash payment of a bonus they were promised for their volunteer service in World War I.

The bonus was due in 1945, but the Great Depression created financial panic across the country, and the WWI veterans wanted their money sooner rather than later.

When the U.S. Senate refused to pass a bill to make the payments, many of the veterans returned home. But the great majority remained and set up camps and occupied buildings near the Capitol – much to the dismay of local police, who tried to evict the demonstrators from their makeshift campgrounds.

At that point, on July 28, 1932, the police asked for federal help. In a written statement, President Herbert Hoover deployed his Army Chief of Staff, Gen. Douglas MacArthur, to settle the matter.

“In order to put an end to this rioting and defiance of civil authority,” Hoover wrote, “I have asked the Army to assist the District authorities to restore order.”

MacArthur’s orders were to secure the buildings and contain the protesters by surrounding their campsite in Anacostia Flats located near the Capitol.

But as MacArthur would do throughout his career – most notably in Korea when his disobedience resulted in his firing – he exceeded his orders.

Late that afternoon, historians have written, nearly 500 mounted cavalry men and 500 infantry soldiers, with bayonets drawn, were accompanied were accompanied by six tanks and another 800 local police officers to Anacostia Flats. It didn’t take long before the protesters were chased out of the city and their encampments burned to the ground.

Read the entire article on The Conversation web site.
External Web Site Notice: This page contains information directly presented from an external source. The terms and conditions of this page may not be the same as those of this website. Click here to read the full disclaimer notice for external web sites. Thank you.