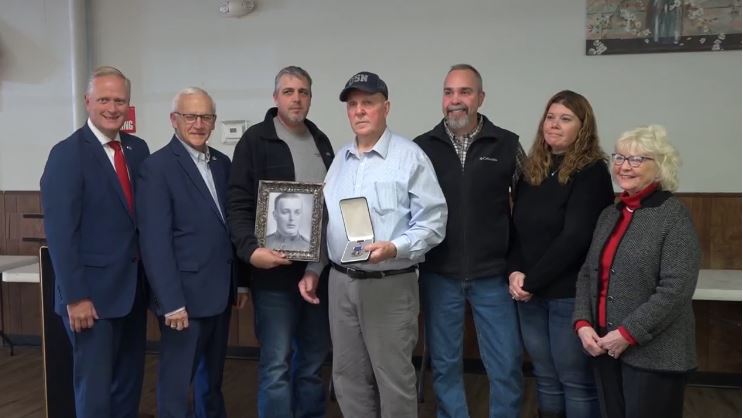 It may have taken 104 years, but one Army veteran from Sayre has finally received the service medals he deserved. Federal and State officials joined at the VFW Post 1536 in Sayre, PA Thursday morning to award Private Raymond Jay Varner the Purple Heart and World War One Victory Medal for his service.

“It’s great. He had it coming, but he never said much about it,” Robert Varner, son of Raymond, said, adding “Growing up, I always wondered what the dents were in his body, and he told me.”

In 1918 Raymond Jay Varner of Sayre was fighting in France during World War One as a member of the United States army. Private Raymond got severely injured during the battle of Argonne Forest, being shot through the right arm, shoulder, hip, foot, and both knees.

The ambulance taking him to the hospital was blown to pieces, leaving him with additional wounds. He laid on the battlefield for three hours before being rescued and was the one man out of twelve in his company to survive the battle.

Varner’s military records were lost in a massive fire that destroyed millions of service members’ personnel files. With some help, Robert submitted a newspaper clipping and was able to move things forward in helping get Raymond the recognition he deserved.

“I figured he never got a Purple Heart, but they never had Purple Hearts back in World War One,” Robert said. “It’s been a long time; about ten years I’ve been trying to get it through.”

Congressman Fred Keller presented the medals to Robert, saying it’s important to recognize and show gratitude for those who serve our country.

Read the entire article on the WENY web site here: External Web Site Notice: This page contains information directly presented from an external source. The terms and conditions of this page may not be the same as those of this website. Click here to read the full disclaimer notice for external web sites. Thank you.