By Cory Brockmann
via the American Legion web site 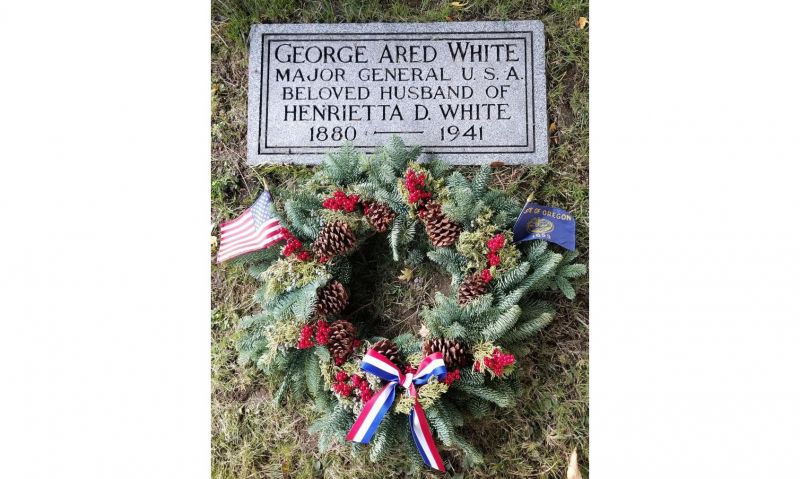 The American Legion Department of Oregon paid tribute to one of the Legion’s founding fathers, Maj. Gen. George Ared White, by conducting a memorial remembrance ceremony at his grave at River View Cemetery in Portland on Nov. 17.

On a sunshine-filled autumn day, with temperatures hovering in the mid-40s, a 26-mph east wind made for a blustery chill but did not deter those gathered at the White family plot, nestled within the wooded, rolling slopes at beautiful River View to honor White.

The ceremony was opened with a presentation of the colors by the Milwaukie Post 180 color guard and followed by an invocation. Included within the ceremony was a reading of the original memorial resolution, which was read at the National Executive Committee meeting in Indianapolis in May 1942, furthering the remembrance of White’s commitment and service to The American Legion and the nation.

Department of Oregon Commander Larry Wittmayer and Department Adjutant S. Flynn Phillips had the honor of placing a memorial wreath adorned with the United States and State of Oregon flags at the White family gravestone. Taps was then sounded, and the ceremony concluded with a benediction.

George A. White (1880-1941) was a journalist who subsequently spent a significant portion of his adult life in military service to Oregon and the nation. It was a life of service that saw him rise from the ranks of newly enlisted to attain the rank of major general.

White served during the Spanish-American War, having enlisted in the U.S. Volunteers, and later during World War I. It was during his service overseas that he worked with then-LTC Theodore Roosevelt Jr. and other officers to form what is today our nation’s largest veterans service organization, The American Legion.

Read the entire article on the American Legion web site.