Life in the Trenches 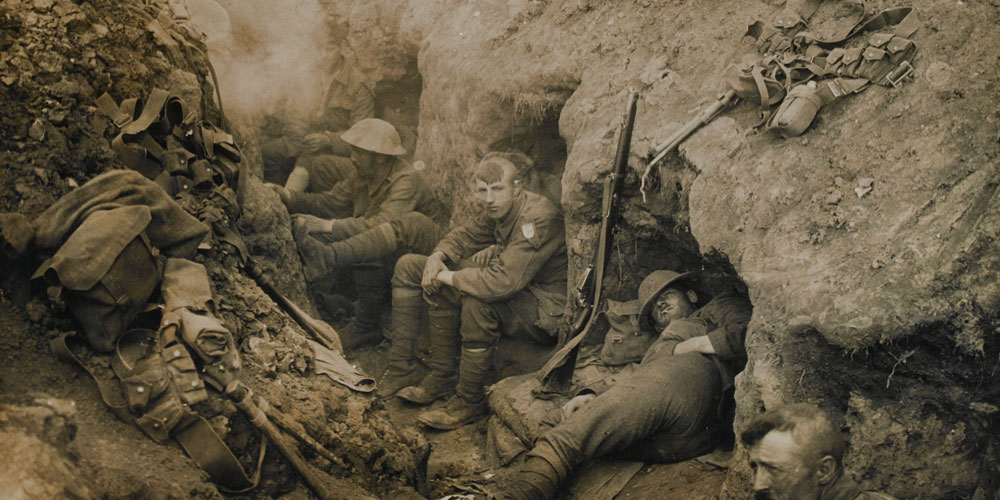 While armies fielded new tools of war, their commanders clung to outdated concepts and methods of fighting. As always, the soldiers in the field suffered.

For three years, men faced each other in opposing trenches, separated by a battered strip of “No Man’s Land,” often only a few hundred yards wide. Each side took turns throwing troops against the enemy. When these attacks ran out of energy, the other side would counter- attack, and things would end up more or less where they had started — except for those killed or maimed in the fighting.

“Months of boredom, punctuated by moments of sheer terror…”

In between these battles, the troops endured a daily routine of tedium and random death. Men spent daylight below ground level, cleaning themselves and their weapons, and maintaining the trench. Personal time was limited; reading or writing letters from home was a favorite pasttime. Nightfall gave the men more freedom to move above ground. They patrolled their area, repaired sandbags and barbed wire, and moved in supplies and reinforcements.

Their companions were vermin, disease and filth. Giant rats and hungry lice infested everything and spread infection. Frogs lived in pools of standing water, which also caused trench foot, a skin infection that could lead to amputation. The stale air carried the smell of sweat, unwashed clothing, lingering gas, smoke and decaying corpses.

The threat of death was constant. From time to time, enemy artillery would strike, blasting metal shrapnel through the trench, or burying men alive. Snipers targeted any head that appeared over the edge of the trench.

Then, at some point, troops would sense a change in the routine: increased movement and artillery firere from the enemy across the way… Was the other side planning an attack?

Or perhaps rumors, reinforcements, supplies… Would it soon be time to climb out of the trenches and head toward the enemy guns?