How World War I Crushed the American Left

By Joanna Scutts
via The New Republic magazine web site 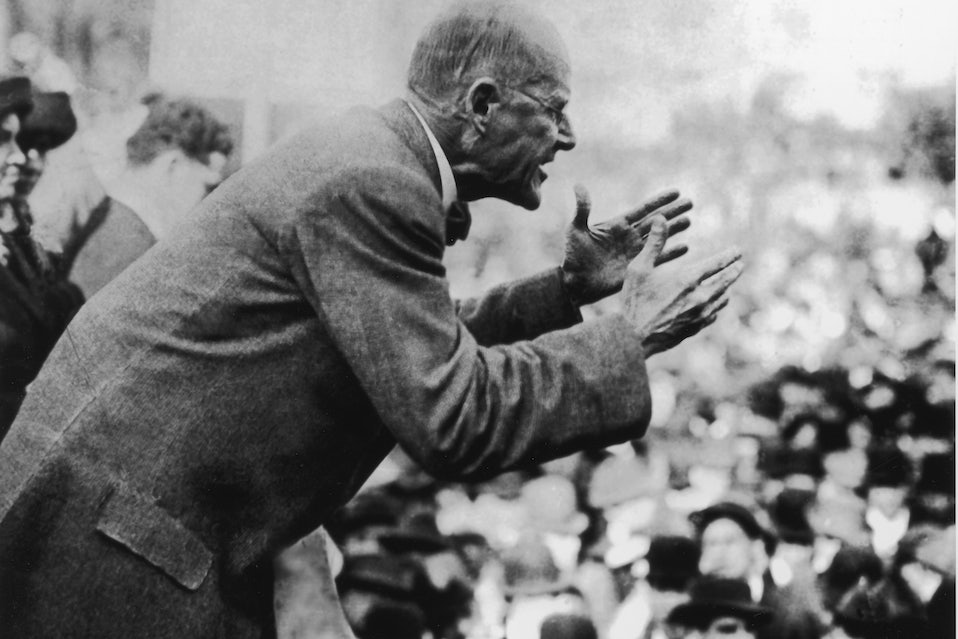 The Socialist Party leader Eugene Debs addressing a crowd, circa 1910. He was jailed for sedition in 1918.

There are few episodes in national history as blithely misunderstood as America’s participation in World War I. In the history-textbook summary, the country remained above the fray until German submarine attacks forced President Wilson to renege on his 1916 election promise to keep the country out of the war. Despite their belated RSVP, the well-fed, well-bred American soldiers arrived in Europe as liberators, marched cheerfully into the protracted slaughter, and quickly put paid to the Hun. Back they came to more cheering crowds, and then it was the Roaring Twenties.

Adam Hochschild’s new book, American Midnight, explores “what’s missing between those two chapters”—an enraging, gruesome, and depressingly timely story about the fragility of American democracy, as both institution and concept. The most prominent figure in this story is Woodrow Wilson, who enjoyed a benign-to-heroic reputation for most of the twentieth century. In bringing the United States into the war, Wilson created a sunny myth of the nation as uniquely virtuous: peace-loving, despite its violent origins, and selfless, despite the hand-over-fist profits that the war was already bringing to American factories. It was such a powerfully appealing line of thinking that “seldom would any later president depart from such rhetoric.” Most famously, Wilson urged his audience that “the world must be safe for democracy”—without anyone stopping to question whether its noble defenders had any idea what the word meant.

When America entered the war as the savior of this vague principle, the country’s industrial might far outweighed its military capabilities. Its army was smaller than Portugal’s, under a high command characterized by one historian as “old, drunk, and stagnant.” The advance guard, led by General Pershing, was greeted with rapture, but it would be almost a year before U.S. troops were on the Western Front in numbers sufficient to make a difference. In the absence of action, there was symbolism: The four sons of Theodore Roosevelt enlisted at once, to the delight of the newspapers and their vocally pro-war father (who was devastated, though not deterred, when the youngest was killed). There was propaganda, courtesy of the new Committee on Public Information; a compliant Hollywood; and the “four-minute men” who traveled the country delivering short, pithy speeches in support of the war anywhere a crowd gathered.

And, as the book lays out in stark and relentless detail, there was repression. “War means autocracy,” Wilson told his navy secretary, in one of his less inspiring, but more sincere, moments. Civil liberties, as we have come to understand them, could not survive in this frenzied atmosphere, and any right to protest, question, or even simply ignore the distant conflict disappeared. Thousands of Americans all over the country were thrown in jail for speaking out against the war or belonging to groups deemed subversive or un-American: labor unions, foreign cultural organizations, and pacifist groups. Many were tortured, several killed, and hundreds of immigrants were deported. The sweeping Espionage Act of June 1917 empowered Postmaster General Albert Burleson, a plantation-bred Southerner, to censor and restrict any publication he deemed anti-war, while librarians pulled books from shelves and pastors who did not fly the American flag were attacked.

The anti-German, pro-war fervor was only part of the story, however. Hochschild makes clear that the Espionage Act was equally conceived as a “club to smash left-wing forces.” A vast network of spies and private detectives went to work infiltrating workplaces, union halls, and leftist gatherings in the hope of hearing disloyal talk and sowing disagreement. Strikes, work stoppages, and picket-line demonstrations were suddenly seen as evidence of enemy infiltration and suppressed even more violently than before. Prominent leaders and speakers on the left were surveilled, harassed, and frequently imprisoned. Most shockingly, Wilson’s presidential rival, the Socialist Party leader Eugene Debs, was arrested and jailed.

Read the entire article on the The New Republic web site.
External Web Site Notice: This page contains information directly presented from an external source. The terms and conditions of this page may not be the same as those of this website. Click here to read the full disclaimer notice for external web sites. Thank you.