via the Norwalk, CT The Heroes web site On the base of the cannon at Norwalk Town Green, in an inconspicuous corner on one of the plaques, is a short list of women who served in WWI. They were nurses with the Army or Red Cross. While none died in the line of duty, their stories need to be told.

The first world war entailed horrific conditions and injuries to those who fought. The recovery from that action was often times led by women like those on this list who volunteered to be there. Passport photo included with her husband’s passport application in 1921

Enid Allen worked as a Social Worker for the YMCA. She was fluent in French and was assigned to France on January 10, 1918. She was then assigned to Germany in December 1918. 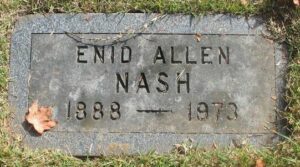 Called into active service on November 1, 1918. Served at Camp Merritt, New Jersey until she was relieved from active duty on November 19, 1919.

Read the entire article on the Honor Norwalk CT veterans web site here: External Web Site Notice: This page contains information directly presented from an external source. The terms and conditions of this page may not be the same as those of this website. Click here to read the full disclaimer notice for external web sites. Thank you.