By Adam Goodheart
via the Harvard Magazine web site 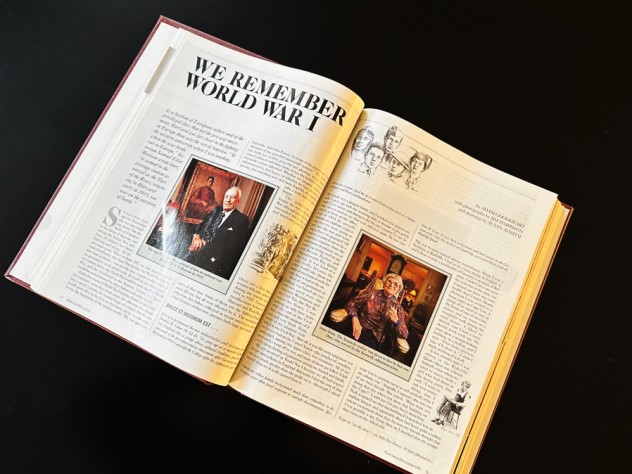 The original article, pictured above, appeared in the November-December 1993 issue of Harvard Magazine.

To honor the nation’s veterans, Harvard Magazine is republishing Adam Goodheart’s remarkable collection of stories about the Great War, “We Remember World War I,” which appeared in the November-December issue of 1993, together with contributing editor Jim Harrison’s engaging photographic portraits.

AS A BASTION of European culture and of the privileged class that led the pro-war movement, Harvard was far closer to the fighting in Europe than was the rest of America. “At the western university where I was teaching when the war broke out in Europe,” historian Samuel Eliot Morison wrote later, “it seemed to the average student as unreal as the Wars of the Roses; returning to Harvard early in 1915, one was on the outskirts of battle.”

Seventy-five years ago this November the war was winding down. On the fields of Flanders, in the forest of Argonne, and among the Italian Alps, millions of soldiers had been fighting and dying for an uncertain cause. When, in June 1917, the first American troops landed in France, the Great War became the World War. For the first time in history—but not the last—human conflict revealed its potential to reach global scale. It would be less than a quarter-century before the World War would become the First World War, and the bloodshed at the Somme, Verdun, and Ypres would be overshadowed by other horrors with other names.

Today few traces of World War I remain distinct in our collective memory: some lines from songs, the silhouette of a dough-boy, a novel, a poem, the mental image of a trench. But the war is still quite alive in the lives we lead today, for in a certain sense it was the beginning of the modern world. “We had spent our boyhoods,” John Dos Passos ’16 wrote of his generation, “in the afterglow of the peaceful nineteenth century.” The world the war made  was neither peaceful nor glowing: weary, battered, cynical, imbued with bitter irony, it was the world the rest of the twentieth century inherited. Whether we imagine ourselves still possessed by that legacy, or whether we have passed, or are passing, into something new and more hopeful, it’s important to take a look back to where it began.

The generation that fought the war is dwindling. But although time has nearly succeeded where the tank and machine-guns failed, there are a few men and women left who came of age during the terrible years of 1914 to 1918. Those whose recollections follow are all Harvard and Radcliffe graduates of that time. Some of them saw the fighting firsthand, some did not, but all were affected by it. The memories and reflections that follow, collected in recent interviews, are individual histories of that time, pictures both large and small.

Son of a prominent Boston industrialist and aviation pioneer, Thomas D. Cabot ’19, LL.D. ’70, grew up as a member of the old New England Elite, a group whose cultural traditions put it in the vanguard of the pro-intervention movement after Germany invaded Belgium in 1914. Cabot left the College after his sophomore year to enlist as an aviator: Aged 96, he is retired from a long career as a manufacturer and Harvard fundraiser. 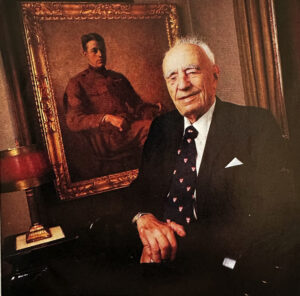 Thomas D. Cabot. The portrait of him in uniform was painted by F.W. Benson in 1917. Photograph by Jim Harrison

MY FAMILY was a jingoist family, and I tended to be jingoist myself. I grew up with the teaching dulce et decorum est pro patria mori [“it is sweet and fitting to die for one’s country”]—my father always used to say that over and over again. He was very much in favor of the Allies, and in 1914 he actually bought an airplane expecting that we were going to get into the war and wanting to have us prepared. Of course, it turned out to be a hopeless airplane from the standpoint of military use; it ended up being used to patrol Boston Harbor and Massachusetts Bay during the war. It was kind of a joke, really, because the plane would take about ten hours of mechanical work for every hour it had in the air.

Most of our patriotism in College was based on two previous great wars: the American Revolution and the Civil War, the War Between the States. I was growing up only forty years after the end of the Civil War, when the memory of it was still very fresh. Many, many of my relations were killed in the Civil War. After all, it was the most sanguinary war we’ve ever had in the United States—the number of casualties, particularly among the upper class, was enormous. All of my great uncles went off to war, and many of them got killed. It left a very strong feeling of patriotism among my friends and family.

We got involved in World War I because we all had respect for our antecedents in England. But today I feel the cost of that war was much greater than the profit on it. Afterward I asked myself what we’d really gained from it.

Read the entire article on the Harvard Magazine web site.