From My Farmhouse Kitchen: Orange City museum pays tribute to those who served

By Renae B. Vander Schaaf
via The Land (MN) web site 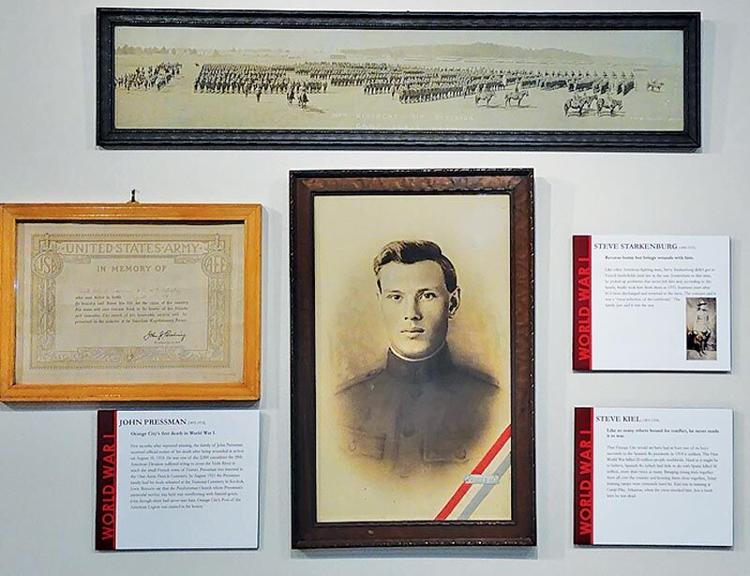 Orange City museum pays tribute to those who served

John Pressman was killed in action during World War I. Orange City's American Legion was named in his honor.

Museums are collections of many different life stories. Some stories are told in more detail, others are just a glimpse into a life once lived. Or they may center on a certain time or theme in history.

Nowhere is this more true than at the Annex of the Dutch American Museum in Orange City, Iowa. This building, located on the corner of Third St. SW and Arizona Ave. SW was constructed in 1903. It served as the F.M. Slagle Lumber store until 1963.

Since then it had been the home for many different businesses. In recent years it has been part of the museum complex. A ribbon cutting was held in August of this year to highlight the Annex’s new purpose, of honoring the men and women who have served in the military.

Arlo Van Beek has been on the museum’s board of directors for 12 years. He presently serves as the president.

“We realized there are many stories of the men and women who served that were not being told and are in danger of being forgotten,” said President Van Beek. “We want to preserve and tell of these stories and sacrifices.”

Beginning in 2019, the soundly-built building was remodeled both inside and out. In keeping with the town’s Dutch heritage theme, it now resembles the architecture from Marken, a fishing village in The Netherlands.

“Remodeling during 2019 we worked hard and fast to be ready for Tulip Festival,” said President Van Beek.  “But realized that Covid would delay the opening.”

Orange City’s Tulip Festival was cancelled in 2020 which proved to be a good thing for the Annex.

“We further realized that this would give us the opportunity to put forth the extra effort to best present the displays and narratives that these items and stories deserve,” said Van Beek.

The displays depict Sioux County men and women who have served in the military — beginning with the Civil War. Orange City was settled in 1870, just a few short years after the Civil War ended.  Several of the early pioneers were veterans from this war between the states.

Marinus Rhynsburger was one of the Civil War veterans. I wonder if the tulips were blooming in the Netherlands when he was born there in May of 1843.  He came to the United States in 1854 with his parents where they became part of the Dutch colony in Pella, Iowa.

With his father, Dirk Rhynsburger, and his brother, John Rhynsburger, Marinus enlisted in the Union army in 1862 as a member of Co. B, 15th Iowa Infantry. He participated in several battles and was twice wounded, once at the Battle of Shiloh and again at the Battle of Atlanta. He served until the war ended.

After the war, he returned to Pella, married and became a merchant. In 1882, he moved to Orange City, where he was in the clothing business with his brother-in-law John Pas.

When Marinus departed from this life at the age of 90, it was believed he was the oldest Civil War veteran in this area.

The tulips were up and growing when the United States officially entered WWI in April of 1917.

Read the entire article on The Land web site.