Five Dog Breeds That Served in World War I 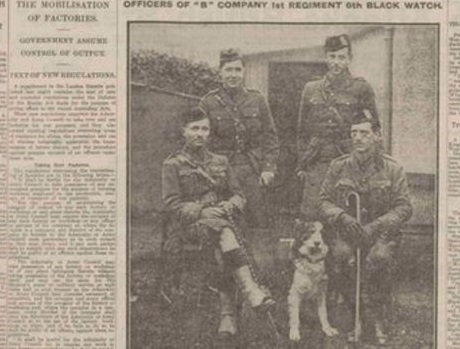 Dash, the border collie, was the regimental mascot of B Company 1st Regiment 6th Black Watch in the UK army.

Dogs are man’s best friend, and at times that means we have brought them with us into the worst parts of what we do. The use of dogs in war is nothing new, but their role changed over time. In the First World War dogs were used extensively by all
sides, with different breeds managing different roles.

Here’s a list of some that have made it into the annals of history.

The Border Collie is widely acknowledged as the most intelligent breed of dog, and their physical attributes made them perfect for many roles. They’re medium-sized, primarily darker in color, and their trainability made them an amazing asset on the
battlefield.

Border Collies could carry messages, locate wounded soldiers, and alert their handlers to the presence of the enemy. While few attained much fame during the course of the war, they were undoubtedly an asset to any unit they were assigned.

Despite their faithful service during the Great War, their popularity wouldn’t surge until after WWII, however.

Sergeant Stubby, the highly decorated Boston Terrier who served with the US Army during World War I.

Boston Terriers are an unlikely breed to find a place in war. They’re small
companion dogs after all. Regardless, the breed produced the most famous Allied dog on the Western Front.

Sergeant Stubby was originally found wandering a campus during training exercises and took a liking to Robert Conroy, a member of the 102nd Infantry. When the time came to ship out Conroy brought the dog with him.

When found out, Stubby saluted the officer as he’d been trained to and was allowed to remain with the unit. Despite his breed, Stubby proved to be an invaluable member of the team. He was able to locate wounded soldiers, warn about gas attacks, and
even led to the capture of a German spy.

For that last act, Stubby was awarded his sergeantcy. Conroy smuggled the dog back in when he returned to the United States and Stubby lived the life of a celebrity until his death.

Not bad for a breed that should have had no place on the battlefield.

The Doberman was used extensively by both German and Allied forces. During the First World War they were used as generalized war dogs. They could be trained to serve in any role that a dog could fill, and they were.

Dobermans are an intelligent breed, but they’re used less often than German Shepherds in modern times due to their independent streak.

Dobermans are extremely trainable and their own intelligence and independent operation made them invaluable in the chaotic conditions of the First World War.

These dogs have proven themselves time and time again, and they’ve fought alongside humans through every modern war.

It’s not a strange thing if you look into the breed’s history, but it has left the dogs with a fierce reputation.

German Shepherd in Gas Mask during World War I.

The German Shepherd originated in Germany, of course, and they served alongside the Axis forces in the trenches. These strong, intelligent dogs were used for a wide variety of purposes.

The most common use was as sentry dogs. Their keen senses allowed them to detect enemy movements in the trenches from distances that simply aren’t possible for a human.

They also proved to be excellent at aiding wounded soldiers and carrying supplies.

They were among the first dogs introduced to the battlefield, and their impressive performance in the harrowing conditions of the trenches quickly inspired most nations involved to train them for war.

German Shepherds have repeatedly distinguished themselves on the battlefield. Their obedience, loyalty, and intelligence is backed by amazing strength and courage.

The popularity of the German Shepherd to this day is a testament to their storied military history.

Rags, the mixed-breed mascot with the U.S. First Division in

WWIIn addition to the purebred dogs used for sentry positions, carrying messages, and aiding wounded soldiers, there were many mixed breed small dogs accompanying the soldiers in the trenches

The nature of trench warfare led to an abundance of rats and other vermin showing up. These vermin could spread disease, get into supplies, and generally wreak havoc on the men around them.

Many terriers were used as ratting dogs. These dogs were trained to seek out and kill rats, which isn’t a hard feat considering many of these small breeds were bred to do exactly that.

While not as impressive as Sergeant Stubby or the larger, more intelligent canines that served, they still played a vital role.

Some even transcended their original role, including a dog named Rags who served with the 1st Infantry Division after being adopted in an impromptu manner in Paris. Rags gained fame for carrying a message from surrounded Americans that allowed them
to escape due to an artillery attack on the enemy location.

Canines have served alongside us in most capacities, but those who were brought into the heat of war show that these animals truly are our best friends. Whether it was heroic exploits, bringing supplies to wounded soldiers, or just handling the
vermin that came alongside the trenches…the dogs who served in the First World War were undoubtedly unsung heroes.