via the Cornell University web site 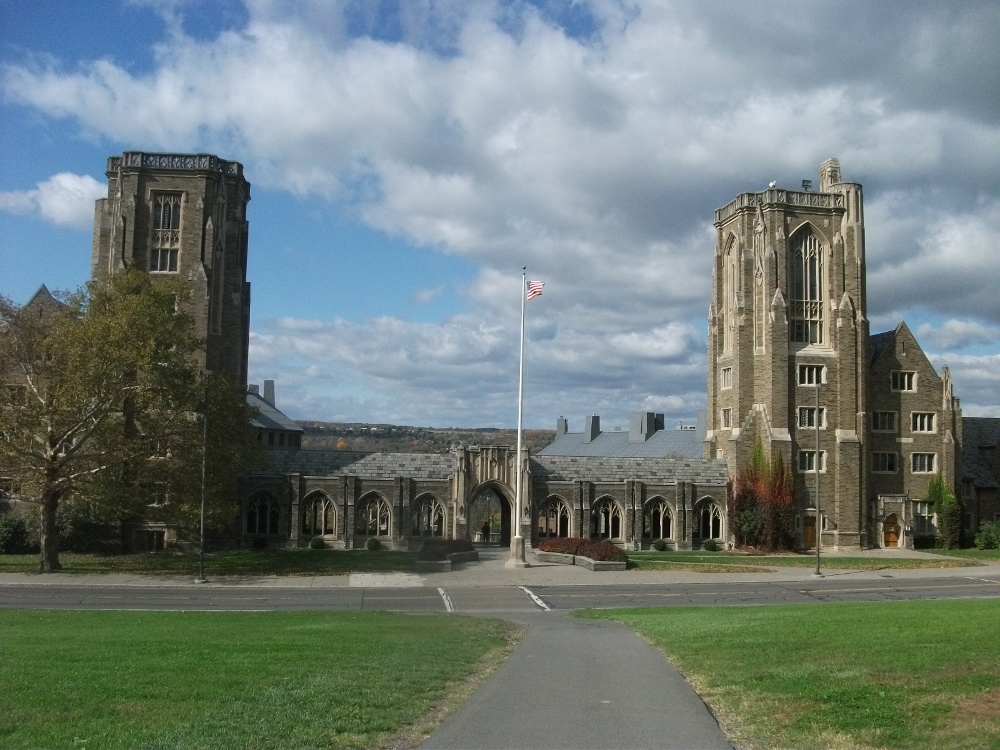 The War Memorial at as seen from across West Ave.

The War Memorial on West Campus was dedicated in 1932 and commemorates Cornell’s 264 casualties during World War I.

The dedication of the memorial was held on the fourteenth anniversary of the first appearance of the Stars and Stripes in the war, which was carried by a small group of Cornell men led by Captain Edward Tinkham. The dedication was national news. It included a national radio broadcast by President Herbert Hoover who gave the dedication speech. You can find a copy of that speech at the bottom of the page. 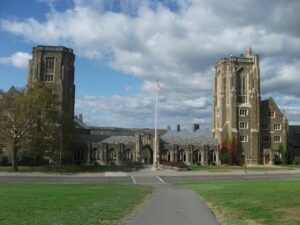 The War Memorial at as seen from across West Ave.

The two towers adjacent to Lyon and McFadden Halls were built in 1928. The North tower, connected to Lyon Hall, was named Army Tower and the south, connected to McFaddin Hall, named Navy Tower. Following the dedication ceremony, a wreath to the memory of Captain Tinkham was placed in the memorial room on behalf of the Italian Government. Wreaths were also placed on Captain Tinkham’s grave in Ravenna, Italy by officials of the Italian Government.

Within Army Tower, at the north end of the cloister, is the Memorial Shrine. Above the entry to the shrine is inscribed: “This entry a memorial of the useful services of Mary Stuart Seaman in Belgium and France from the outbreak of hostilities until the end of the war is the gift of her husband Louis Livingston Seaman ‘72 Major Medical Corps U.S.V.” Major Seaman is also memorialized in Barton Hall for his service.

Built in 1931, the Shrine was originally open to all but, after anti-war protesters burned furniture and defaced the room in the 60’s, the room was closed. In 1984, the Memorial Shrine was reopened. It served as a lounge for the neighboring dormitory. In 1990, C Company, 1 Regiment of the Scabbard and Blade, which is Cornell’s chapter of the ROTC honor society, was made responsible for the Shrine. The Shrine also houses a stone panel on its north wall engraved in gothic script with the memorial’s purpose:

When the United States of America
engaged in the great war of
1914 – 1918
thousands of the students, former
students, and teachers of
Cornell University
entered the country’s service
and therein manfully did their duty.
Many of them lost their lives –
We who knew those dead
have built here
what we hope shall remain
their enduring memorial.

Engraved directly above the script is a shield bearing the University’s emblem, and the wall above the university’s emblem is covered in a beautiful mural depicting an angelic scene with two figures, one entering from each side of the mural. One figure with wings appears to carry a flaming sword, and a five-pointed star in an outstretched hand. The other carries what appears to be a sheaf of wheat. (Artist: Allison Mason Kingsbury Bishop) Below the inscription is a stone table with a recess containing an illuminated book recording the names of the 264 casualties.

Read the entire article on the Cornell University web site here: External Web Site Notice: This page contains information directly presented from an external source. The terms and conditions of this page may not be the same as those of this website. Click here to read the full disclaimer notice for external web sites. Thank you.