By Tam May
via the Tam May, Author web site 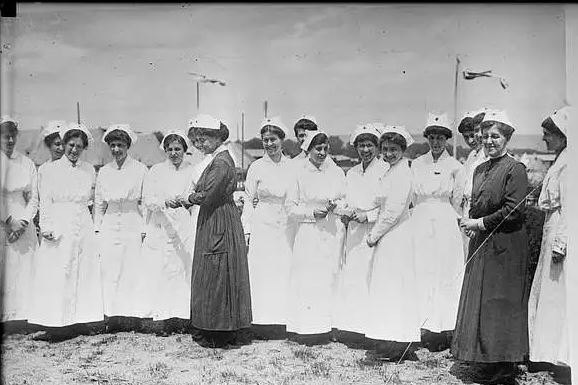 American Nurses in Rouen, France during World War I preparing to go to the front lines, from Good Housekeeping, Oct 1918

I have a special place in my heart for nurses because my mom was a nurse back in the 1980s. She worked in the ER of our local hospital for a while and then became a home healthcare nurse. Though she retired from the profession when my parents moved back to Israel, she still to this day uses her medical expertise to advocate for family members and friends and help them maneuver through the Israeli healthcare system.

So today, on Veteran’s Day, it seemed fitting to honor war nurses. I wanted to take a look especially at World War I since this war is in the time frame of my Adele Gossling Mysteries (well, not yet, but it eventually will be.) Although called the Great War, it’s more like the Forgotten War these days (usurped by World War II).

World War I saw a lot of bloodshed and tragedy (if you want to read more about this war, you can read this blog post) and even though Americans didn’t get into the battle until about a year and a half before its end, American soldiers still saw plenty of fighting and nurses did plenty of healing. Sadly, many of these nurses didn’t get the honor and credit they deserved.

Linnie Leckrone was one of these. She was a nurse in one of the toughest situations during wartime: She was part of a unit that helped soldiers who were under constant artillery attack. She helped many soldiers under gas and shock in the most frightening conditions. However, where many men who came home from the war received a hero’s welcome, Leckrone got nothing when she came back to her hometown of Portage, Wisconsin. However, all is not lost, as in 2007, Leckrone received a posthumous Silver Star medal for her bravery and courage, which her daughter accepted.

Unlike Leckrone, Lenah Higbee did receive her due. Higbee actually joined the US Navy Nurses Corps in 1908 and endured a lot of caustic remarks for doing so. But Higbee, dedicated to her work, persevered, and eventually became the second woman superintendent of the corps. Her work during World War I helping wounded Navy soldiers earned her the Navy Cross and her name on a battleship!

Read the entire article on the Tam May, Author web site here: