Barber, 75, Pleads Guilty in 1976 Killing of World War I Veteran

By The Associated Press
via the Epoch Times newspaper web site 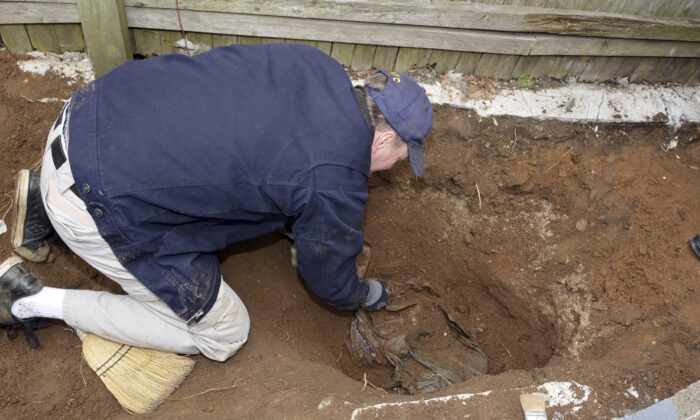 In this image provided by the District Attorney's Office of the Queens borough of New York, anthropologist Dr. Bradley Adams, of the Office of the Chief Medical Examiner, examines buried human remains of World War I veteran George Seitz, on March 12, 2019. Martin Motta, a 75-year-old New York City man, pleaded guilty Tuesday, Oct. 18, 2022, to manslaughter in the 1976 killing of Seitz, whose dismembered remains were found in 2019, Queens District Attorney Melinda Katz said Wednesday, Oct. 19, 2022 (Office of the Chief Medical Examiner via AP)

A 75-year-old New York City man pleaded guilty to manslaughter in the 1976 killing of a World War I veteran whose dismembered remains were found in 2019.

Martin Motta’s guilty plea Tuesday in the death of George Seitz represented the first successful use of genetic genealogy by any of the city’s prosecutors, Queens District Attorney Melinda Katz said. Seitz had been a customer at the Queens barbershop where Motta worked.

“No matter how much time has passed, we will use every tool at our disposal to achieve justice,” Katz said in a news release.

The disappearance of Seitz, a World War I veteran who was then 81 years old, remained a mystery for decades until a tipster led police to a backyard where dismembered body parts were buried under concrete.

Initially, a DNA profile of the remains failed to lead to an identification, but advanced efforts by a private lab in February 2021 led to a genealogical profile that FBI investigators were able to use to identify the victim as Seitz, Katz said.

Seitz was last seen leaving his home to get a haircut on Dec. 10, 1976, authorities said. Investigators determined that Motta robbed Seitz, a regular customer, of about $8,000 in cash, stabbed him to death and hacked the body to pieces.

The witnesses included a woman who had watched in horror as Motta cut Seitz’s body up inside the barbershop, a spokesperson for the district attorney said. The woman, now in her 50s, was then a 10-year-old girl whose mother was dating Motta.

Read the entire article on the Epoch Times web site here: External Web Site Notice: This page contains information directly presented from an external source. The terms and conditions of this page may not be the same as those of this website. Click here to read the full disclaimer notice for external web sites. Thank you.