By Andrew Kelly
via the Bristol Ideas (UK) web site 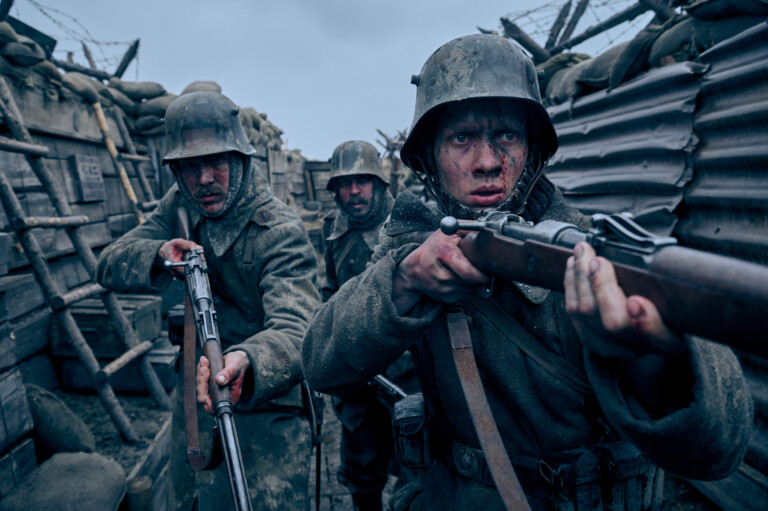 With the new German version of All Quiet on the Western Front poised to hit screens this week, we decided to reflect on the other great anti-war films of the First World War.

Netflix’s All Quiet on the Western Front is arriving in our cinemas this week, with Watershed screening the film from 14 October. The film is based on the book by Erich Maria Remarque. A veteran of the war, it took him nearly a decade to come to terms with what he had experienced. The result was Im Westen nichts Neues – brilliantly translated by Arthur Wheen as All Quiet on the Western Front – the first in a trilogy about the war (followed by The Road Back and Three Comrades). The Nazis hated both book and film. The book was burned; the film banned; and Remarque had to go into exile.

Lewis Milestone made the film for Universal. Andrew Kelly from Bristol Ideas wrote this book in the 1990s on the film, its history and what followed release and the wider anti-war cinema of the war. The film was celebrated worldwide, won Academy Awards but was controversial.

The first anti-war film in WW1 – though it was not about the war – was the Danish Die Waffen neider / Lay Down Your Arms, based on the book by Nobel Peace Prize laureate Bertha von Suttner. A pacifist and novelist, Suttner was the first woman to be given the award. Released in 1914, in the US it was used to support isolationism. The director, Holger-Madsen, made two more anti-war films during the war.

After making Birth of a Nation – a huge success, but rightly condemned on race grounds and its portrayal of the Ku Klux Klan – D W Griffith made Intolerance in 1916, which looked at brutality through the ages and ended with a plea for tolerance. In 1918, Griffith made Hearts of the World, about lovers torn apart in a French village under German occupation where they face torture and destruction. And, in 1924, Isn’t Life Wonderful, set in post-war Berlin, about refugees to the city. It’s now regarded as one of Griffith’s best films.

In 1919, just after the war ended, Abel Gance’s J’Accuse was released. A remarkable film. At the end, the dead of the war rise up to accuse the living. Some of the extras in the film came from the frontlines and had been killed in the war by the time of release.

In 1925 The Big Parade was released. It was about an ordinary American doughboy and his comrades in France. The rush to war ends in horror for some of the soldiers. A huge success which showed that films about the war could again reach an audience.

Read the entire article on the Bristol Ideas web site here: External Web Site Notice: This page contains information directly presented from an external source. The terms and conditions of this page may not be the same as those of this website. Click here to read the full disclaimer notice for external web sites. Thank you.