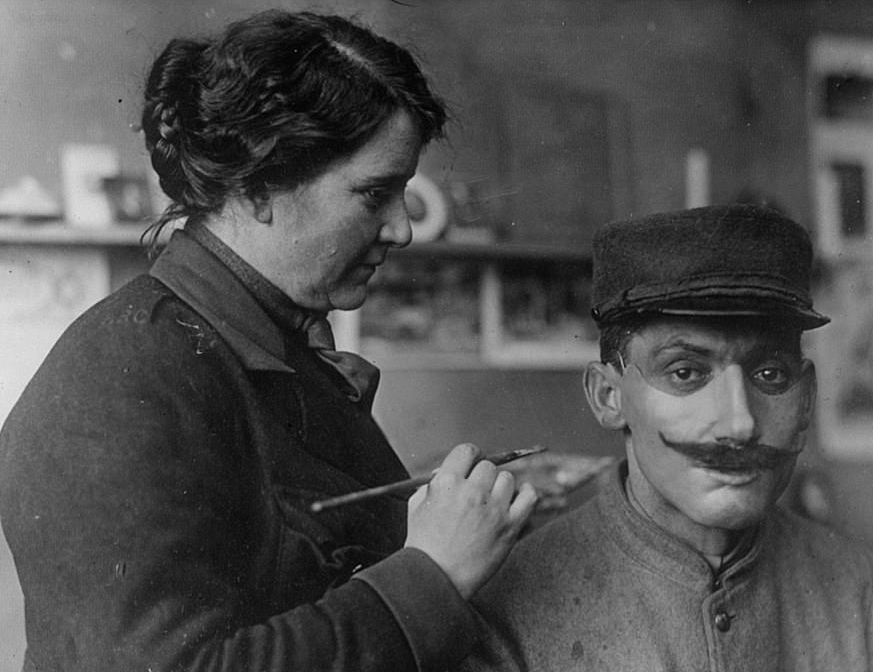 Anna Coleman Ladd works on the mask of one of the soldiers. The incredible set of photos from nearly 100 years ago show the impact one American sculptor had on the lives of numerous soldiers who were horrifically disfigured during World War One.

By Gareth Davies
via the mailonline.com web site

Incredible before and after photographs show how British soldiers had to have their faces rebuilt having been maimed during World War One.

Images taken shortly after the conclusion of the First World War, between the end of 1918 and the beginning of 1919, show the horrible facial injuries suffered by several soldiers.

The pictures show how a pioneering sculptor and a leading surgeon used their expertise to transform the men who had become victims on the frontline.

Anna Coleman Ladd created custom-made masks for soldiers to wear over their wounds.

Ladd was an American-born sculptor who studied in Paris and Rome, and soldiers would come to her studio to have a cast made of their faces, which would then be used to help construct the prosthetic from very thin copper.

This would then be painted to try and resemble the soldiers’ skin colour, and each piece would be adorned with some form of string or eyeglasses in order to keep it in place.

Before she got to work on the masks, many soldiers required surgery to rebuild their faces.

Young surgeon Harold Gillies transformed the faces of many of those who were injured and shipped back to Britain.

Read the entire article on the mailonline.com web site here.