A prayer for the Unknown Soldier 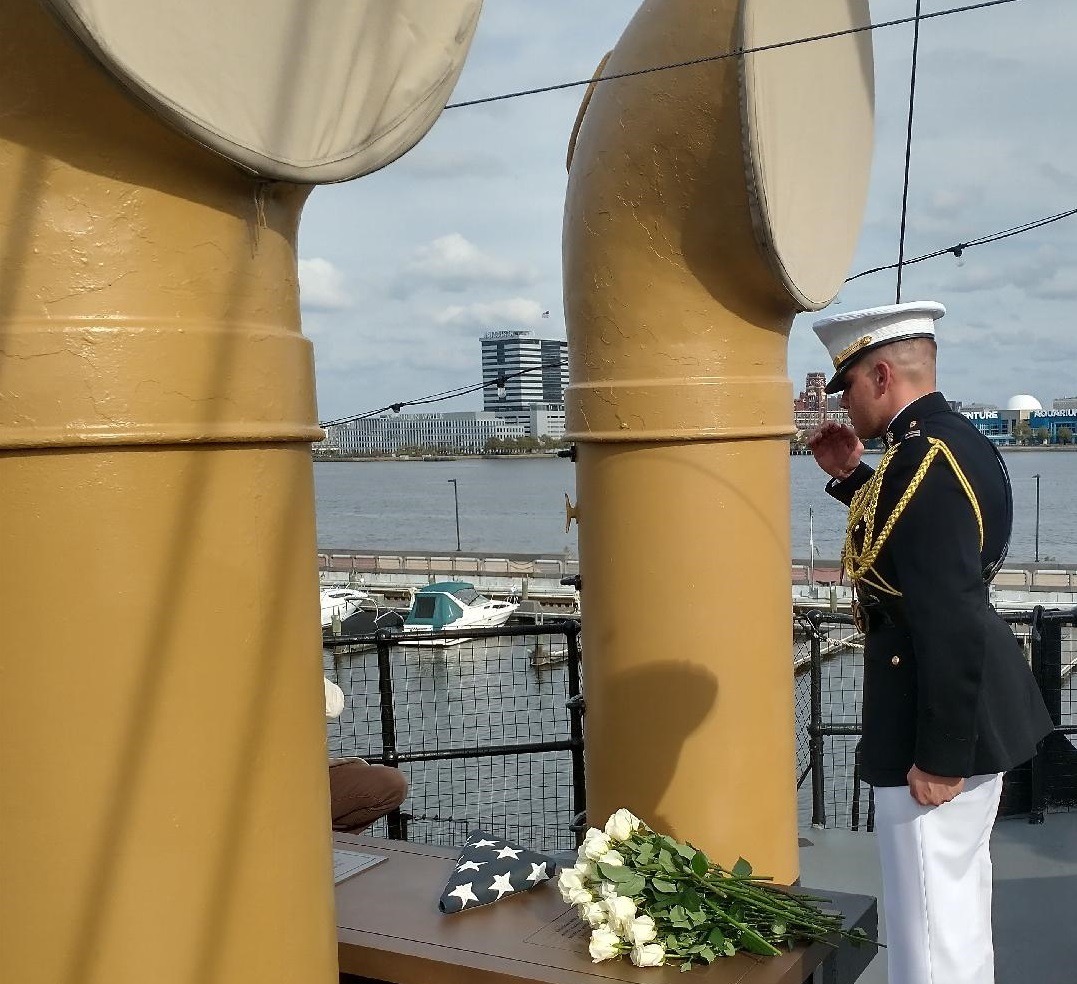 On October 25, 2021, a U.S. Marine salutes the commemorative plaque on the bridge of the USS Olympia that notes the location where the box containing the body of the Unknown Soldier was lashed to the deck. Nov. 11, 2021, marks the 100-year anniversary of the first interment ceremonies at the Tomb of the Unknown Soldier, and for Philadelphia’s Roman Catholic High School this centennial commemoration holds special significance.

A prayer for the Unknown Soldier

By Chris Gibbons
via the Broad + Liberty web site

It was early November 1921, and the storm-tossed waves of the Atlantic Ocean wrought by the great Tampa Bay Hurricane continually pounded the deck of the USS Olympia as she valiantly fought to stay afloat. Waves approaching 15 feet repeatedly slammed into the ship causing it to roll a precarious 39 degrees. Crew members witnessed the deck plates shifting up and down and feared they might come apart. As chronicled in Marine Lieutenant Colonel Dennis Nicholson’s In Good Hands, Private Frederick Landry said that “all hands and the ships’ cook speculated on how close she would come to capsizing on the next roll.”

Lashed down to the deck of the USS Olympia was a canvas-covered box containing precious cargo. Its importance was so great that a Marine guard was ordered to be stationed by its side around-the-clock. Two additional sentries were also ordered to stand close by and assist should the storm loosen the cargo from its signal bridge mooring. Nicholson wrote that the seas were so heavy that these Marines were “lashed to a stanchion to prevent their being swept from their stations by waves swishing over the decks.”

Tasked with forming and commanding the 40-man Marine Guard to accompany the cargo aboard USS Olympia was Capt. Graves B. Erskine, a battle-scarred World War I veteran who fought at the battles of Belleau Wood, Soissons, and St. Mihiel. Erskine said that when he thought of the cargo washing overboard, “I might as well jump over with” it. His sentiment was certainly understandable, for the box contained the casket that held the remains of America’s Unknown Soldier of the Great War.

Several months prior, the United States Congress approved the burial of an unidentified American serviceman from World War I in the plaza of the new Memorial Amphitheater at Arlington National Cemetery. The bodies of four unknown American soldiers were then exhumed from their battlefield graves in France. U.S. Army Sgt. Edward F. Younger, a Great War veteran and recipient of the Distinguished Service Medal for bravery, randomly selected the Unknown Soldier from among these four unmarked caskets. Amidst great fanfare and newspaper coverage in America and Europe, the famed USS Olympia, flagship of Commodore George Dewey at the Battle of Manila Bay during the Spanish–American War in 1898, was selected to transport the body from the French Port of LeHavre. An entire nation anxiously awaited its arrival as a solemn ceremony with President Warren G. Harding officiating was planned for November 11th, the three-year anniversary of the end of the Great War. Numerous foreign dignitaries were to present their highest service awards during the ceremony.

Consequently, the crew of the Olympia was well aware of what was at stake, and as the storm continued to batter the beleaguered vessel on November 5th and 6th, its captain, Capt. Henry L. Wyman, feared that Olympia would sink. He knew that his courageous crew would do everything they could to keep the ship afloat, giving their lives if necessary, but the captain now believed that he needed divine intervention.

He summoned for Lieutenant Edward A. Duff, a Navy chaplain who, by chance, joined the crew in Portsmouth, England to simply hitch a ride home. Duff, from Philadelphia’s Roman Catholic High School Class of 1903, served in Europe aboard the USS Nevada during the war. He was among the over 1,500 Roman alumni who were World War I veterans. An astonishing sixteen Roman alumni served as chaplains in World War I, including the highly decorated and revered 28th Division’s Reverend Lieutenant Joseph L. N. Wolfe.