“A journey of research & learning that continues to this day” 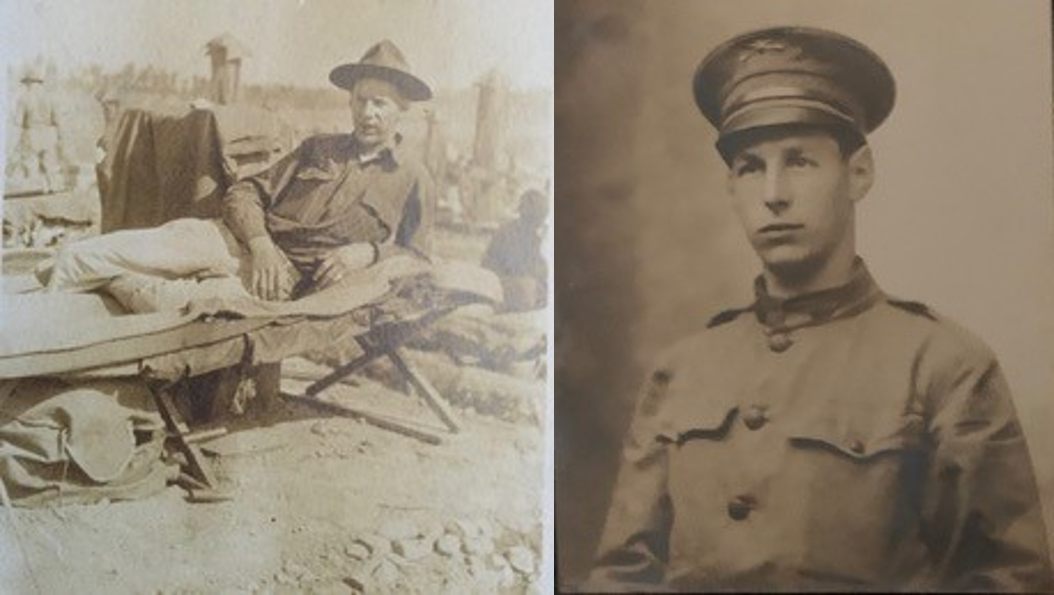 Like many students of World War I, I took an interest upon learning that a family descendant fought in the Great War. It all began some 50 years ago when as a 12 year old, my father showed me some documents and told me his uncle had received an award while running through enemy fire on his way to the rear to get reinforcements. And that is all I remember from that day as he never shared with me any more stories about my great uncle George.

Fast forward 50 years later to 2014 while I am cleaning out my parents’ home and preparing for it to be sold, I come across a photo album belonging to my great uncle, 1st Sgt. George Hedges / Company C / 114th Infantry Regiment / 29th Division. AEF.

As I looked at the photos with dates and locations it didn’t make much sense to me because I, like most Americans, had little knowledge of our role in WWI. But it would put me on a journey of research & learning that continues to this day. 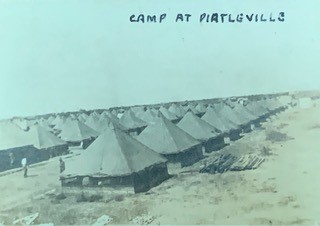 On the Mexican Border, Columbus, AZ 1916

The oldest picture I found was from 1916 taken at Camp Porterville, Douglas AZ. which really puzzled me. I would later learn that as a member on the NJ National Guard, he was sent to the Mexican border while the regular Army pursed Poncho Villa in Mexico. Federal law prohibited the National Guard to leave the country, thus they protected our border from within. 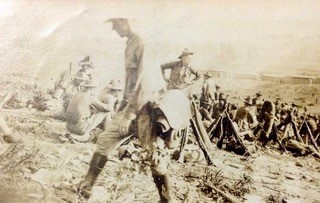 The next collection of photos is from September 1917 following our declaration of war in April 1917,when his unit, 5th Infantry NJ National Guard was sent to the newly created Camp McClellan in Anniston AL. Many of these photos show the camp being constructed, the men living in tents. Also included are many photos of soldiers in his company along with dates and names of those soldiers from 1917 thru May 1918, just prior to them shipping overseas. It was at this time his NJ unit became part of the newly formed 114th Infantry Regiment of the 29th Division.

In October 1918 the 29th division crossed the Meuse River with orders to attach the Heights of the Meuse where the German artillery was inflicting heavy casualties on our troops. Here he took some photos of his soldiers and on the back of each photo was the soldiers name, dated October 10, 1918 and included “Dead Man’s Hill” N.W. of Verdun.

On the morning of October 12, 1918 at 0700, Co’s A & B of the 114th began their assault. My uncle George of Co C along Co D, also in support followed. In advancing uphill they took tremendous losses. With all the runners casualties, my uncle George would make his way to the rear under heavy enemy fire to bring up reinforcements for which he would earn a Silver Star. Captain William Reddan, commanding Co B began the battle with 200 men and ended the day with 12 soldiers. In his book “To Conquer Hell / The Meuse Argonne”, Dr. Edward Lengel dedicates a chapter about Captain Reddan’s story from that battle. Learning of this battle took me back 50 years when my father briefly shared part of the story.

I have researched every soldier I could from all the photos and added them to a Facebook page I manage in keeping the memories of those soldiers alive. Many descendants of those soldiers have located their grandfathers on my page along with their stories. Often while researching a soldier whose picture I had, I would find they were KIA. 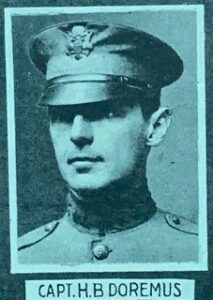 While most of the soldiers I researched were part of the original NG unit, many were transferred to other units. In researching them I would learn about other battles they fought in i.e. Chateau-Thierry which made for a great learning experience.

Lastly, Captain Harry Doremus who commanded Co C was a career soldier, beginning with the Spanish American War in 1898. On October 26, 1918 he was killed in action on this the final day of combat for his regiment as they were relieved at noon on that day. One original document I have is a field message sent to my uncle advising the death of Captain Doremus. Will all officers casualties, my uncle George would take over command of the company and its remaining 46 soldiers.

In closing I can say this has been a tremendous learning experience. Following the war in 1921 the NJ archives reached out to the families of those young men lost in battle. They requested a photo of their son and a brief history about each boy. I have gone through the letters these parent wrote and the one thing they all asked for was that the photo be returned as it was the only photo they had of their son.

While I wish my dad had taken the time to share more of our family history, I have made it a point to share all I know with my grandchildren.

You can find more of my WWI research at https://www.facebook.com/HackensackWW1Veterans 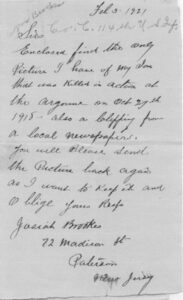 Letter from mother of Private Cyrus Brookes. (Click to enlarge.)

I had purchased numerous original print books from the early 20’s about WW1, including “History of the 29th Division” Source Book / Operations of the 29th Division East of the Meuse River Oct 8-30. I also researched the NJ Archives, Ancestry and newspapers.com. And of course the many photos my great uncle took during his service from 1916-1919. 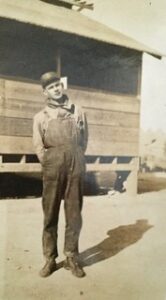 One of the photos I came across was of Private Cyrus Brooks / Brookes taken in September 1917 when his unit arrived at Camp McClellan AL. In the photo at right, he’s wearing overalls as he was not yet issued a uniform.

Private Brooks was the company runner for Capt. Harry Doremus of Co. C. On October 25th he was KIA from artillery. In his file from the NJ Archives was a letter (left) from his mother which she wrote in 1921, in which she mentioned a newspaper article about her son’s death.

After researching for several years I finally found the article she mentioned. To my surprise the newspaper published a letter (below) sent to her written by my great uncle 1st Sgt. George Hedges.

This was an example of the combined numerous sources I used in putting a story together. Although somber, I think you will enjoy  reading the text of the article below.

The death on the firing line of Private Cyrus Brooks, of C Company, 114th
Infantry Regiment, is told by his sergeant George E. Hedges in a letter to Mr.
& Mrs. Brooks of 104 Cedar St, who asked for details upon being advised by
the war department of their son’s demise.

Your letter of inquiry dated Dec 3, 1918 regarding Private Cyrus Brooks, No
1280028, Company C, 114th Infantry to hand and it grieves me very much to
tell you that the report in the casusalty list was correct.

Private Brooks was known in the company as a “runner”, or as a liaison agent for the commanding officer. During the engagements in which our organization participated his conduct was excellent. He was at the captains side and always eager and willing to perform any and all duties that fell his lot. His manner was most cheerful and he was beloved by all who knew him.

He met his death on October 25,1918 in the line of duty caused by the explosion of a high explosive shell (enemy). He was not killed instantly nor was he injured in any way except internally. After the shell had made a direct hit on the shelter where he and three companions were, they were able to crawl through the hole that it had made in the roof as the door and entrance were completely blocked up and went to the next shelter to spend the night
not knowing that the concussion had been so great. His death was not painful but due to the fact that when a person suffers from severe concussion they bleed to death internally. He was cared for by the proper persons who have charge of these things and his grave was properly marked. In due time his body will be sent to the states.

As I was close by when this occurred and in charge of the company (next of course to the captain) you can appreciate that this is the truth and you can rest assured that everything possible was done for his comfort and welfare.

Captain Harry B. Doremus thought more of Cyrus than any other man in the company and I might add that I was most attached to him, being in daily contact with him and feel his death more than any other member of the command.

You may be proud of Cyrus. His work was bravely and nobly done.

Trusting that this scant information is satisfactory, I remain.