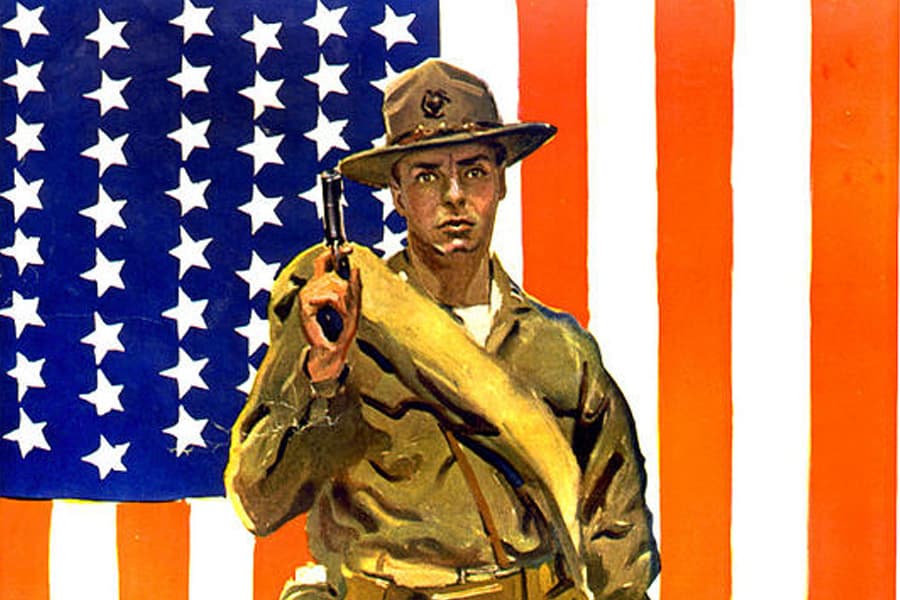 The achievements of the 4th Marine Brigade on the battlefields of Europe, as one of the two infantry brigades of the Second Division, US Army, comprised the major effort of the Marine Corps in Europe during World War I.  The 5th Regiment of Marines had landed in France with the first expedition of American troops in June 1917, and by February 1918, with the arrival of the 6th Marine Regiment and 6th Marine Machine Gun Battalion, the 4th Marine Brigade was brought up to full strength.

On 14 March 1918, the 4th Brigade commenced movement into subsectors of the Verdun front, the first units entering the front line during the night of 16-17 March.  The Marines remained on this relatively quiet front until 14 May, when the 4th Brigade relocated to the vicinity of Chaumont en Vixen, where intensive training was undertaken in anticipation of being assigned to an active front.  It was here that the Marines received sudden orders to move to the Chateau-Thierry sector.

In late May 1918, the Germans launched their third offensive, crossed the Chemin-des-Dames, captured Soissons, and on the last day of May, were advancing down the Marne Valley in the direction of Paris.  The startling success of this German attack caused the Allies to throw the Second Division, including the 4th Marine Brigade, into the front lines, blocking the German advance in the Chateau-Thierry sector.

The fighting in this sector was divided into two parts, one a stubborn defensive action lasting a week, and the other a vicious offensive.  The end of the Aisne defensive operation (31 May – 5 June) found the front line well established at that point of the Marne salient nearest to Paris.  On 6 June the Allies took the initiative away from the Germans and started an offensive that did not end until 1 July.

On the first day of the attack, the Marine Brigade captured Hill 142 and Bouresches in bitter fighting.  By 26 June, the Marines had finished clearing the Germans out of Bois de Belleau (Belleau Wood).  During these 31 days of constant fighting, the Marines suffered 9,063 casualties, 1,062 battle deaths and 7,253 wounded.  The French Army in appreciation of the valor of the 4th Brigade, officially renamed Belleau Wood as the “Bois de la Brigade de Marine.”

After being relieved during the night of 5-6 July, the Marine Brigade moved to an area in the rear of the front lines and occupied the Line of Defense, or Army Line, with headquarters at Nanteuil-sur-Marne.  It remained until 16 July.

On 17 July 1918, the Marines along with other Allied units, were hurriedly and secretly led on forced night marches over jammed roads, through rain and mud, to a point near Soissons.  Early on the morning of 18 July, the 5th Marine Regiment, in coordination with other Allied units, began a major offensive.  Sweeping the Germans through the woods before them, the Marines soon captured Translon and Verte Feuille Farms, halting their onward rush only after the enemy managed to reinforce their defense line running south through Vierzy.

The attack had succeeded so well that another advance was ordered the same afternoon.  When the advancing Marines finally stopped for the night, the front lines had pushed to nearly a mile east of Vierzy.  By this time, the 5th Marine Regiment was so completely exhausted that it could make no further effort.

The 6th Marine Regiment, from its initial position in reserve, had moved to the front.  When a continuation of the attack was made on 19 July, the 6th Marines moved out in attack on a front of about 2,500 yards, with the first battalion leading on the right, the second on the left, and the third in support.  The objective was still the same, the Soissons-Chateau-Thierry road, and the Germans were making every effort to strengthen the line to stop the Allies’ advance before it reached this strategic position.

The Marines, with insufficient artillery support, advanced across the level ground without any concealment and in perfect view of the enemy.  The German artillery, with ample air observation, promptly put down a destructive fire upon the advancing Marines, which, together with machine gun fire, virtually slaughtered the ranks of the leading battalions.  The enemy’s strongly organized position in Tigny soon stopped the advance of the first battalion.  The second battalion managed to reach the shelter of the woods about five hundred yards west of Villemontoire.

The losses to the original front line battalions averaged more than 50 percent.  Since it was hopeless for the decimated regiment to attempt further advance without reinforcements, the Marines were ordered to dig in during the early afternoon.  That night, the entire 4th Marine Brigade was relieved from their positions on the front lines.

Remaining in a reserve position until 22 July, the 4th Brigade, after final relief from this active sector, billeted in an area around Nateuil-le-Haudouin.  It remained there until 31 July.

On 5 August, the Marine Brigade began movement for the occupation of the Marbache subsector, near Pont-a-Mousson, on the Moselle River.  The movement was completed on 8 August.  The sector was quiet and the Marines’ stay on the front line was uneventful except for an enemy raid which was successfully repulsed.

The relief of the Marines from the Marbache sector was completed on 18 August, and the brigade moved to an area about 20 kilometers southeast of Toul, where intensive training for the impending St. Mihiel offensive took place.  Starting the night of 2 September, the brigade relocated itself outside of Manonville in a series of night marches.

During the period 12-16 September, the Marines were engaged in the St. Mihiel offensive in the vicinity of Remenauville, Thiaucourt, Zammes, and Jaulny.  On the evening of the 13th, the Marine Brigade took over the entire front line of the advance.  During the rest of the operation, the task of the Marines was to drive back the German outposts in front of the St. Mihiel position.  Marine losses in this offensive totaled 132 killed and 574 wounded.

At the urgent request of Marshal Ferdinand Foch, the Second Division, including the 4th Marine Brigade, was now temporarily placed at the disposal of the Fourth French Army to assist in breaking through the powerful German defenses.  On 28 September, the 4th Brigade moved by bus and foot to the Souain-Suippes area.  The general plan provided for an attack by the whole French Army between the Argonne and the Suippes River.

On 1 October, the Marines, along with the rest of the Second Division, marched to the front line near Somme-Py and relieved elements of a French Division.

The Second Division had been given a front of more than three miles on which to attack early on the morning of 3 October.  It put both of its infantry brigades on the line, with the 4th Marine Brigade on the left, with sectors covering Blanc Mont Ridge.  The 6th Marine Regiment led the advance for the brigade in a column of battalions on a front of approximately one mile.  The 2d Battalion led the assault with the 1st and 3d Battalions following.  During the attack, the 1st Battalion had to assault a strongly organized German machine gun nest, called the “Essen Hook,” in the French sector, which the Marines captured and turned over to the French.

On 4 October the 5th Marine Regiment passed through the 6th Marine Regiment to continue the attack.  The advancing Marines were subjected to extremely severe casualties as a result of flanking machine gun and harassing artillery fire; over 1,100 Marines were casualties that day.  Early the next morning, the 6th Marines passed through the lines held by the 5th Marines and continued the attack.  Finally, on the morning of the 6th, the 1st Battalion, 6th Marines captured the ridge.

By this time, the Second Division had again expended its utmost effort and was overdue for relief, but the 1st Battalion, 6th Marines was now assigned the task of capturing St. Etienne.  On 8 October, its 76th Company succeeded in taking the town, and despite reduced numbers, managed to hold this advanced position during a German counterattack that night.  The relief of Marine units on the Champagne sector was finally completed on 10 October.  During the week of almost continuous combat in this sector, the Marine Brigade suffered 494 killed and 1,864 wounded.

After a brief period of rest, the 4th Marine Brigade, again as part of the Second Division, moved into the front lines just south of Landres-et-St. George on the night of  30-31 October, to participate in the immense Meuse-Argonne offensive, which had started on 26 September.  Early on the morning of 1 November, the Brigade, following a terrific artillery barrage, began an assault for its final operation of the war.  At the conclusion of hostilities at 1100 hours on the morning on 11 November 1918, Marines were firmly established on the heights of the far bank of the Meuse River, after an advance of 30 kilometers.

After the formal signing of the Armistice, the Marines participated in the march to the Rhine, where they became part of the Army of German Occupation.  Their stay on the Rhine was uneventful, except for an incident in June 1919.  At this time, serious friction in the Peace Conference resulted in the Marines, along with other units of the Second Division, advancing two days march to the east.  They were soon withdrawn, however, to their former positions along the Rhine after final agreement with the German delegates was made.  The Marines began their return to the States in the middle of June 1919, arriving home in August.

The 5th Marine Brigade, organized at Quantico in September of 1918 and consisting of the 11th and 13th Regiments and the 5th Machine Gun Battalion, also served in France, but did not engage in combat.  The 13th Regiment arrived at Brest, France, on 25 September 1918; all units of the 11th Regiment were in France by 25 October, and the 5th Machine Gun Battalion arrived at Brest on 9 November.

Upon arrival in France, the 5th Marine Brigade was assigned to the Service of Supply, which was in need of dependable troops for guard duty.  The 13th Regiment soon found itself scattered, and doing guard duty along with the western coast of France, while the 11th Regiment was stationed in the general area of Tours.  There it performed similar duties, such as guarding the aviation training center at Issouden, and furnishing some companies for military police duty.  The brigade machine gun battalion was stationed at Camp Pontanezan, Brest.  The units of the 5th Marine Brigade continued to perform these general duties until July 1919, when they assembled at Brest and returned to the United States early in August.

Although the battle record of the 4th Marine Brigade, as part of the Second Division, overshadowed all other activities of Marine Corps personnel in Europe during World War I, officers and men of the Marine Corps participated in the conflict in other ways.  Marine detachments served on all battleships and cruisers operating in the European theater.  In addition, from early August 1918 to the date of demobilization, the Commanding General of the Second Division and several officers on his staff were Marines.  At various times, Marine officers were attached to the First, Second, Third, Fourth, Sixth, Twenty-Sixth, Thirty-second, Thirty-fifth, Ninetieth, and Ninety-second Divisions, and in some cases engaged in operations with them.

Marine aviation personnel also served in France as the Day Wing of the Northern Bombing Group of the Navy.  The Day Wing carried out 14 independent raids far behind the enemy lines, and brought back valuable information.  A few Marine officers and enlisted men engaged in Army aviation operations, and about 20 Marine officers were sent to France as observers, and participated in operations with American, French, and British forces.  While in Europe, the Marine fliers served with Squadrons 213 (pursuit squadron), 217 and 218 (bombing squadrons), Royal Flying Corps of England, and with pursuit, observation and bombing squadrons of the French Flying Corps.

On “land, air, and sea,” the American people could be justifiably proud of the performance of their Marine Corps in World War I.