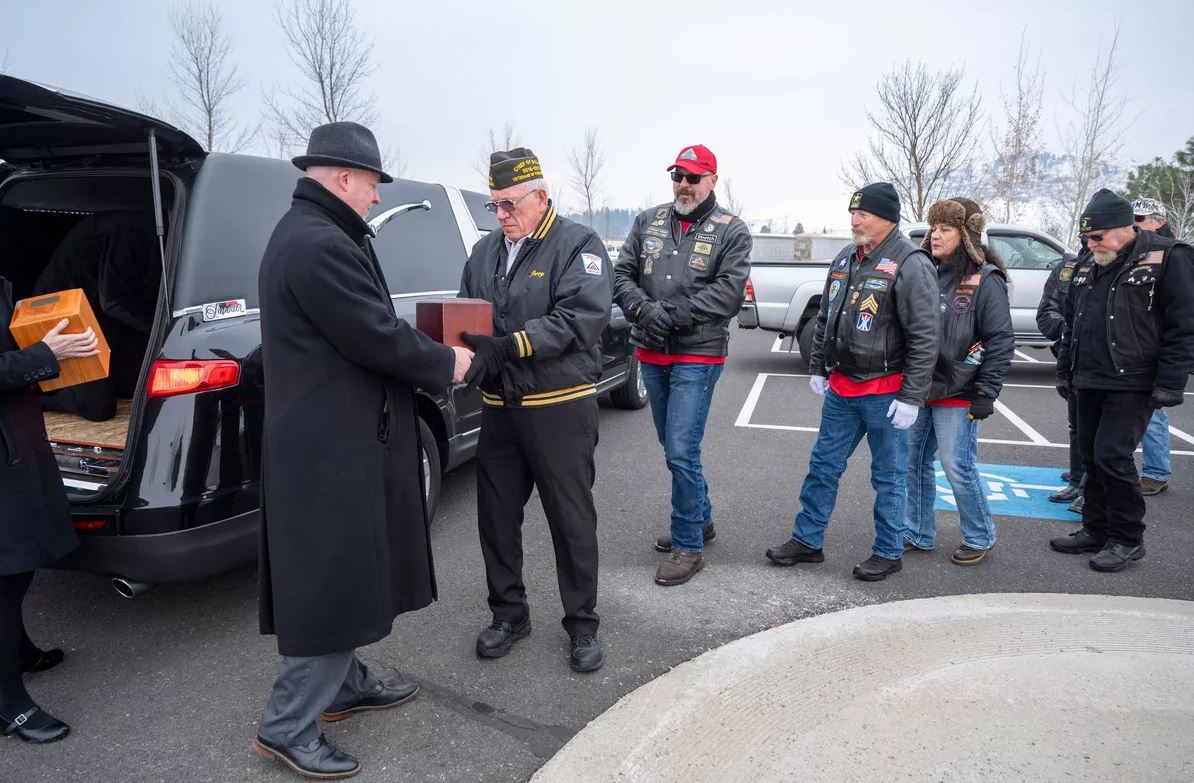 Veterans line up Wednesday outside a hearse and carry the cremated but unclaimed remains of veterans, some more than a century old, to the office at the Washington State Veterans Cemetery in Medical Lake. They will be stored until they can be placed in a columbarium wall at a later date. (Jesse Tinsley/The Spokesman-Review)

They were once forgotten, but never again.

On Wednesday, November 16 the ashes of 106 veterans unclaimed by their families were brought to their final resting place at the Washington State Veterans Cemetery in Medical Lake.

“People go unclaimed for various reasons,” said Rob Goff, CEO of the Washington State Funeral Directors Association, during Wednesday’s ceremony. “Sometimes it’s just too hard for families to come back, too physically painful for them to return to the funeral home and pick up their loved ones. Sometimes there’s just nobody left.”

They were accompanied by 27 spouses and children of veterans who were also eligible to be buried in the cemetery.

Three children of veterans were infants who died too young to have been given a name. Four members of the Sutherland family were brought to be interred Wednesday, including a veteran, his wife and child, and a brother who also served.

Myra Kinzie died 110 years ago this month. Her husband, John Kinzie, was a veteran of the Indian Wars who died in 1914, two years after his wife, and was laid to rest in Medical Lake just five years ago. For more than a century, their remains had sat unclaimed in separate funeral homes. Now, for the first time since Myra’s death, they are together again.

Some arrived in engraved cedar or oak boxes, others in ornate ceramic packaged in Styrofoam for transportation. At least one had been stored in a plastic bag.

Their ashes will be placed among the cemetery’s thousands of niches where cremated remains are interred.

All 133 of them made their final journey from funeral homes in Western Washington. They were escorted across the state by members the Patriot Guard Riders of Washington, a group of motorcyclists that provides support during funeral services for fallen military members.

It is the end of a decadeslong wait for the veterans and their families, and a two-year effort by members of the Missing In America Project, a nonprofit that works to identify and inter the cremated remains of American veterans.

Read the entire article on the Spokesman-Review web site.